Let's get this out of the way right up front: I'm not a PC gamer. I'm not really a gamer at all; while I of course love to kick back with the occasional game, I don't consider myself a member of the "hardcore" gaming community by any measure. I've had every Playstation since the original (and, in fact, still have the 2, 3, and 4), but even then I'm an enthusiast at best. My favorite games of all time are basically anything from the Metal Gear series, Red Dead Redemption, and The Last of Us. You can probably already tell from that list what kind of stuff I like to play — I'm a third-person action gamer all the way.

So why go into all that? Because I want you to realize where this hands-on is coming from. It's not coming from someone who has played every PC game from the past ten years. Hell, I couldn't tell you the last time I actually played a game on my PC. The way I see it — and I know I'm going to catch some hate for this — PCs are for work, consoles are for games. Yeah, I went there.

But that's also where I feel like NVIDIA got this right: it's a service for both PC and console gamers — or as I like to think of them, gamers. (I honestly hate the separation between the two.) It's great for casual gamers, because it allows them to have a pretty big collection of titles for $7.99 a month. It's good for PC gamers because, well, these are PC games. It's good for console gamers because it's got that traditional console feel, thanks to SHIELD's controller. Really, it's a great marriage of everything.

So, is it perfect? Nah. But it's a damn good start. 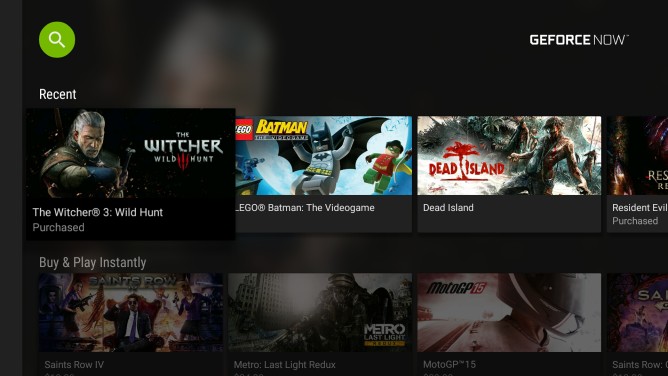 I basically highlighted what GeForce Now is all about in yesterday's post, so I'm not going to go into many details about what the service actually is, but more about how it works.

First things first, GeForce Now is part of a full system update for SHIELD devices, not just a quick APK download or SHIELD Hub update. I tested GFN on SHIELD Android TV, so not everything that I'll say will apply to every device, but the core experience should be the same no matter what.

Once the update has been pulled, you'll immediately notice that SHIELD Hub has changed: gone are the Stream Games, Download Games, and GeForce Games options, as they've been replaced with GeForce Now, SHIELD Games, and GameStream. This makes a lot more sense to me, because the "stream" and "download" titles of the previous format were a bit ambiguous. With this, you know exactly what you're getting into. Since we're just talking about GFN now, though, we're going to ignore the other options — they're basically the same that they've been since the start anyway.

Jumping into the GeForce Now option immediately throws you right into the service's primary interface, with quick access to recently played games, Buy & Play Instantly titles, and new games for members down below that. From there it gets a little more granular, with popular titles showing up, and then very specific suggestions like Batman and Lego games. This section is clearly something NVIDIA will be able to curate and update as it sees fit, so it'll most likely change often.

At the bottom of this main interface you can sort through games by genre: action, adventure, arcade, family, first person shooters, puzzle, racing, and role playing. Finally, you can also view games by type: Buy & Play, purchased, included with membership, and multi-controller titles. So, basically, there are multiple way to find something new or otherwise sort through the catalog. I like that.

You can also modify account and billing info from this screen, but that's all pretty straightforward so there's no need in paying a lot of extra attention to that.

OK, so now that you're familiar with the app's interface and how it works, let's get down to business. Let's play some games.

Like I mentioned yesterday, GeForce Now requires a few things before it'll work: a GameStream-Ready router is a must, as is a 5 GHz connection (but if you've got a GameStream router, then the latter shouldn't be an issue). NVIDIA also recommends a minimum 12 Mbps connection, though I can't say I think that would offer a very good experience after using the service. 20 Mbps is required for games to stream at [email protected], while 50 Mbps is a must for [email protected] So, basically, if you've got a crummy internet connection, GFN isn't going to do much for you. 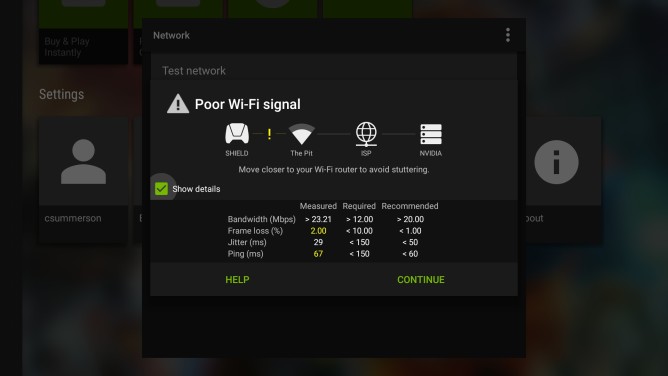 Upon using NVIDIA's included network testing tool, I got the following results:

For comparison, NVIDIA recommends the following:

So yeah, I'm pretty well within those ranges. The only thing worth noting is that it does tell me my Wi-Fi signal is poor and to move closer to my router, which isn't really possible. My router is in the living room, which is about eight to ten feet from my office, though the signal has to go through a few walls in between.

I tried out a handful of games, both ones that are included in the membership and a couple of Buy & Play titles. Basically, they all performed exactly the same, regardless of if it was something less graphically-intense like Lego Batman or more realistic like The Witcher 3.

Considering my aforementioned "weak" Wi-Fi signal issues, all the games were extremely playable — there were a few moments where the game would lag here and there, but overall it was nothing that I'd say hindered gameplay. There was also a bit of artifacting around the darker areas of the screen, but I imagine that also has a lot to do with my internet connection -- if you have 50 Mbps+ and can stream 1080p at 60 fps, that probably won't happen. Latency is basically non-existent, and overall I can tell a definite improvement from the last time I gave GRID a shot.

Graphically, I was very impressed with the quality from GFN, especially when I sat back and thought about what I was actually looking at: a game running on a system thousands of miles away from my house, magically beamed over the internet to a $300 box running what is basically a mobile operating system. It's pretty incredible, to be honest.

Is it worth it? 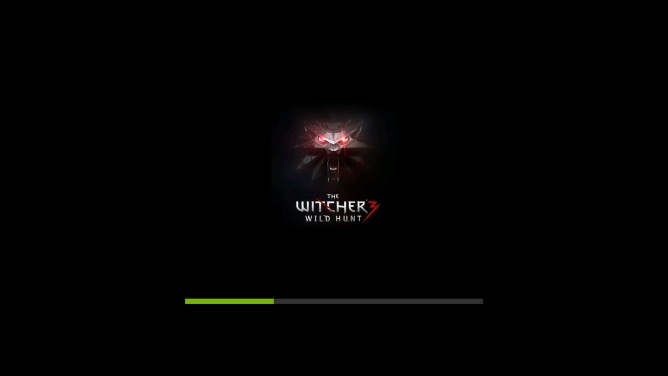 That's the real question, isn't it? Well, here's the thing: you don't need me to answer that for you. Since NVIDIA is offering GeForce Now to all SHIELD owners free for three months, you have plenty of time to make that decision for yourself, because let's be real here — there are a lot of different variables that will affect how well it runs for you.

And that, in my opinion, is the biggest hurdle NVIDIA has to jump. There's no doubt that most people would love a game streaming service — especially one that only costs eight bucks a month — but they want one that works. Geographical location, network congestion, router type (and location), and internet type are just a handful of the things that will play a factor in how well it works for you.

But I fully recommend giving it a go — if you have a SHIELD, there's no reason not to. There's already a lot to like about what NVIDIA has going on with GeForce Now, and now that it's out of beta, I imagine it'll keep getting better at a fast pace. The selection is going to get larger, the gameplay smoother.

That growth, of course, will also determine how valuable the service is. In its current state, it has a little over 50 games for instant streaming. While that's not a small number, it's not a very big selection when compared to all the games available for purchase on services like Steam, or even in Google Play for that matter. And it goes without saying that no one will like all 50+ — some people may only like a tenth of them. For those people, new titles will be a must, because once replayability is gone, the service just becomes a waste of money — new content on a regular basis is going to be king here.

The Buy & Play Instantly catalog will also need to grow regularly, which will keep regular customers who may want the latest games happy. When it comes to that segment, though, NVIDIA has a different challenge to face: getting all game developers to offer download codes with their games when purchased through GeForce Now. Because what happens if you use the service for, say, a year. During that time you buy 17 games, but only half come with a download code. Then you decide to cancel. Do you get to keep those games? Are they gone forever? The ones with the included download code will undoubtedly stay in your library, but the others? Well, they're gone...at least until (if?) you decide to re-subscribe to GeForce Now. That's how it works for now, at least. Hopefully, as the service grows, more developers will want to offer download codes. I mean, it's yours, so it should be...yours.

And that brings up the biggest questions: whether or not this is a sustainable service and what the future may hold for it. I can't imagine there being enough SHIELD devices out there to really keep everything afloat for an extended period of time (unless I'm grossly underestimating how many SHIELDs have been sold altogether). Like I suggested earlier, eventually we may see GeForce Now make its way to Windows PCs, which would be the next logical step. After that, however, who knows? Playstation? Xbox? That would certainly be a wild ride. Highly unlikely, but wild nonetheless.

As with any new service, only time will tell. But for the meantime, let's have fun with it.