For a guy who's retired from leaking, Evan @evleaks Blass sure does leak a lot of stuff. For his latest OEM-annoying trick, Blass has posted high-resolution images of the LG V10, which is supposed to be announced tomorrow. In case you missed it, that's the dual-display phone that's been popping up in recent weeks.

There are two images, with the above showing the entirety of the phone. Along the top is the secondary "ticker" display. It's showing text on the left phone, and on the right it has app icons for the camera, contacts, and so on. The different versions of the ticker in this leak support the idea that you can customize it to some degree. I'm not sure how it will work as a shortcut launcher, though. It's way up at the top of the phone, which doesn't make it easily accessible. The picture below offers a better look at the ticker. 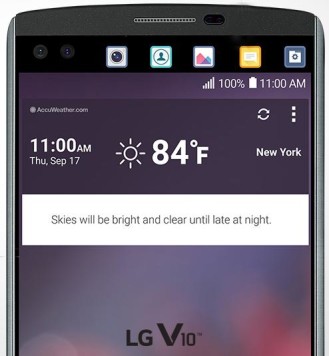 On the back of the V10 is a larger power button. That's expected to house a fingerprint scanner. Those are the hot new things on phones these days. Haven't you heard? We'll get all the details tomorrow morning at LG's event. The new images do look much nicer than the previous leaks. Hopefully the real device looks alright.