It's no secret that NVIDIA has been working on a game streaming service for quite a while — it's called GRID, and anyone with a SHIELD device has been able to test it out for the past several months. Today, the company is announcing the result of all that testing: GeForce Now.

GeForce Now is, at its core, a gaming service. It lets subscribers stream over 50 high-end PC games (at launch), as well as buy and play others instantly. That's pretty huge in itself — without the need to wait for hours for downloads, it removes a lot of the hassle of picking up something new to play. Many purchased games will also include a download key for Windows machines, so users aren't boxed into one platform.

And that answers one of the main questions many users will be asking (especially considering the service's name): will it be available for Windows PCs? For the time being, the answer to that question is no. NVIDIA has spent a lot of time optimizing GeForce Now for SHIELD devices, and it will be available exclusively on them at launch. Just so we're clear, that means SHIELD Portable, SHIELD Tablet, and of course the company's flagship SHIELD product, SHIELD Android TV. 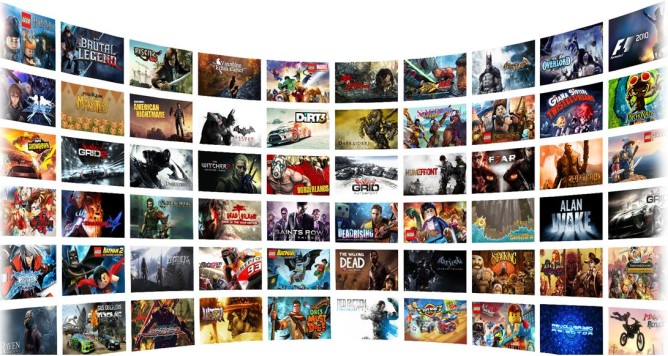 That raises another question (albeit a slightly trivial one): why name it "GeForce?" If it's not available for desktop PCs running NVIDIA's trademark graphics cards, then why throw that in the name of the service, instead of something like SHIELD Now? Or sticking with GRID? To me, it's simple: the backbone of the service relies on NVIDIA's most powerful GPUs — GeForce GPUs — to run the show. Given that, "GeForce Now" makes sense. And who knows, maybe eventually we'll see it on PCs, so the name is really kind of future-proof…as much as I don't really like using that term.

Anyway, I'm straying too far from the original topic here — there are more important things to discuss than a name! Like price, for example. Ah, yes. Since GRID first became a thing, that was one of the huge questions hanging over users' heads: how much will this cost?! I was pleasantly surprised with the price point: $7.99 a month. That's unlimited streaming of the full catalog, as well as instant streaming of any purchased games. Oh, and just so you can get a good taste of what GeForce Now is all about, it's free for the first three months on any SHIELD device. So you can get good and invested in it before you realize that you have to cough up that eight bucks a month…which, now that I think about it, is surprisingly similar to Netflix's price. There must be something to that.

So, what kind of titles can you expect from the stream-only side of the service? If you've spent any amount of time dabbling around in GRID, then you probably already have a good idea of what's here in Now: things like Batman: Arkham Asylum, Arkham City, and Arkham Origins, for example. Dead Island. Borderlands. Red Faction. Saints Row. And a whole slew of Lego Games. I'm not going to list them all, as there are more than 50 titles. I think it goes without saying that there are some pretty good titles to choose from. Oh, and they all stream at up to 1080p, 60 fps.

As far as Buy & Play games are concerned, the selection isn't quite as vast: Metro 2033 Redux, Metro: Last Light Redux, MotoGP 15, Saints Row IV, Saints Row: Gat out of Hell, Resident Evil: Revelations 2, Trine 3: The Artifacts of Power, and The Witcher 3: Wild Hunt basically round out the catalog. But, really, I have a feeling NVIDIA is just getting started.

Of course, there are a few qualifications in order to get started with GeForce Now. Firstly, a GameStream-Ready router is required, as well as a solid 5GHz connection. 12Mbps is the absolute minimum that will work with GeForce Now, while 20 Mbps is recommended for 720p 60fps streams, and 50 Mbps for 1080p 60fps streams.

GeForce Now will be available on all SHIELD devices in the U.S., Canada, Europe, Japan, and South Korea beginning tomorrow, October 1st.

500px Photography Finds A Bigger Canvas As Your Chromecast's Backdrop