Samsung Pay was promised way back at the Galaxy S6 announcement, but it's only now on the verge of release. Samsung Pay will eventually allow you to pay wirelessly at almost any credit card reader with your phone, but you'll need a few system tweaks first. T-Mobile is sending out updates to the Galaxy S6, S6 Edge, S6 Edge+, and Note 5 that either add, break, or update Samsung Pay. Yeah, it's kind of a mess. 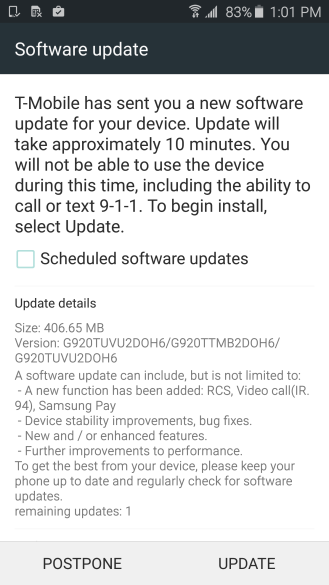 On older phones like the Galaxy S6 and S6 Edge, the new updates will add the Samsung Pay application to the phone. A previous update added the app to some devices, but I didn't see the Pay app on the GS6 until today's OTA. Some of those who were beta testing the service report that the app no longer launches after the update, and it's apparently the same for new users. I'd wager it has something to do with moving to the final version of the app.

In the case of the GS6 and GS6 Edge, it looks like the update also adds support for T-Mobile's video calling and RCS messaging features. Samsung Pay will launch on September 28th, which is this coming Monday. It will only be available on Samsung's 2015 flagship devices and with carrier support.