A rumored BlackBerry device has been making its way around the web for long enough now that it hardly qualifies as a rumor. Since June, we've seen leaked promotional photos and videos. We've seen photos of it in the wild. We've seen hands-on footage. And then yesterday we heard that its name would be not the Venice, as previous expected, but Priv.

"At the same time, we are focused on making faster progress to achieve profitability in our handset business. Today, I am confirming our plans to launch Priv, an Android device named after BlackBerry's heritage and core mission of protecting our customers' privacy. Priv combines the best of BlackBerry security and productivity with the expansive mobile application ecosystem available on the Android platform."
—BlackBerry CEO John Chen

BlackBerry has further outlined its vision for the Priv on its blog, along with providing a logo (pictured above). In short, BlackBerry sees now as a good time to release a phone that emphasizes privacy and security.

So why is it important that we extend to Android? Launching an Android device is a tremendous new market opportunity as we continue our focus on building a cross-platform strategy. It’s a terrific proposition for dedicated Android users who are seeking greater productivity and powerful privacy features. And we are advancing our own platform, redefining the expectations of mobility in today’s age of risk and cybercrime so that we can serve customers even better.

BlackBerry is pitching the device as a way to offer "best in class security" for enterprise customers. It intends to make the device available later this year in major markets both in-stores and online. 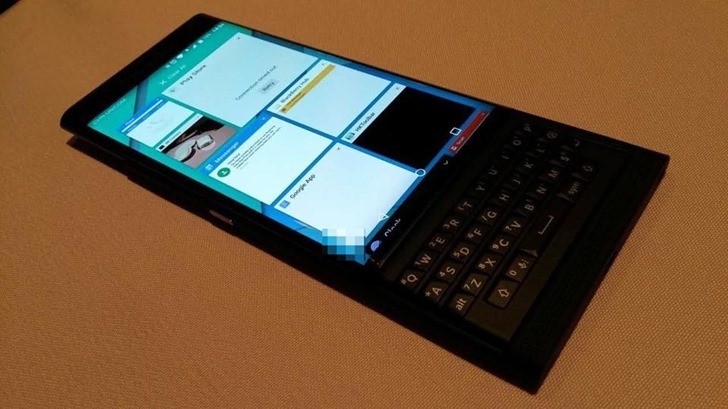 BlackBerry went on to add that this release does not mark the end of its own mobile operating system. It intends to provide platform updates for BlackBerry 10, with version 10.3.3 scheduled to hit in March of next year.

Non-GAAP revenue for the second quarter of fiscal 2016 was $491 million with GAAP revenue of $490 million. GAAP revenue reflects a purchase accounting write down of deferred revenue associated with the acquisition of WatchDox. The revenue breakdown for the quarter was approximately 15% for software and services, 41% for hardware, and 43% for service access fees (SAF). BlackBerry had 2,400 enterprise customer wins in the quarter. Approximately 60% of the licenses associated with these deals are cross-platform. During the second quarter, the Company recognized hardware revenue on over 800,000 BlackBerry smartphones with an ASP of approximately $240.

Non-GAAP loss for the second quarter was ($66) million, or ($0.13) per share. GAAP basic net income for the quarter was $51 million, or $0.10 per basic share. Basic GAAP net income includes the aforementioned purchase accounting impact on GAAP revenue, a non-cash credit associated with the change in the fair value of the debentures of $228 million (the "Q2 Fiscal 2016 Debentures Fair Value Adjustment"), pre-tax charges of $85 million related to restructuring, stock compensation of $14 million, and amortization of acquired intangibles of $11 million. The impact of these adjustments on GAAP net income and earnings per share is summarized in a table below.

Total cash, cash equivalents, short-term and long-term investments was $3.35 billion as of August 29, 2015. The cash balance increased $37 million in the second quarter. The company repurchased 6 million shares during the quarter for a total of $47 million. Excluding $1.25 billion in the face value of our debt, the net cash balance at the end of the quarter was $2.1 billion. Purchase orders with contract manufacturers totaled approximately $248 million at the end of the second quarter, compared to $238 million at the end of the first quarter and down from $344 million in the year ago quarter. Excluding the impact of foreign exchange rates, operating cash flow was $110 million with free cash flow (operating cash flow minus capital expenditures) of $100 million.

"I am confident in our strategy and continued progress, highlighted by our fourth consecutive quarter of year-over-year double digit growth in software licensing revenue and sixth consecutive quarter of positive free cash flow," said Executive Chairman and Chief Executive Officer John Chen. "In order to expand our leadership in cross-platform software and services, we are investing strategically - organically through new products and services based on the BES platform, and through acquisitions like AtHoc and Good."

"At the same time, we are focused on making faster progress to achieve profitability in our handset business. Today, I am confirming our plans to launch Priv, an Android device named after BlackBerry's heritage and core mission of protecting our customers' privacy. Priv combines the best of BlackBerry security and productivity with the expansive mobile application ecosystem available on the Android platform," continued Mr. Chen.

"From these initiatives, we anticipate modest sequential revenue growth in each of the remaining quarters of fiscal 2016."

Acquisitions of Good Technology and AtHoc

On September 4, BlackBerry announced it had entered into a definitive agreement to acquire Good Technology for $425 million in cash. The acquisition is aligned with BlackBerry's strategy to offer customers the most complete, end-to-end solution that secures the entire mobile enterprise, across all platforms. The acquisition will further build on BlackBerry's strong leadership in Enterprise Mobility Management (EMM) value-added services. Good will bring complementary capabilities and technologies to BlackBerry, including secure application management and containerization that protects end user privacy - with the majority of its activations from iOS devices. This experience combined with BlackBerry's strength in BlackBerry 10 and Android management will provide customers with increased choice for securely deploying any leading operating system in their organization.

The transaction is expected to close toward the end of the company's 2016 fiscal third quarter and is subject to customary closing conditions, including regulatory approvals.

On September 22, BlackBerry closed its acquisition of AtHoc, a leading provider of secure, networked crisis communications for $250 million in cash. AtHoc's platform alerts any device - including iOS, Android, PC and Mac desktops, digital displays, radios, IP phones, and endpoints such as sirens, fire panels and speakers - helping organizations and people to connect and share information in times of crisis. The acquisition is well aligned with BlackBerry's strength in government and public sector, and AtHoc will become a key component of the company's Internet of Things (IoT) platform. The leading provider to the U.S. Departments of Defense (DoD) and Homeland Security, AtHoc also supports public and private enterprises across the world, including healthcare providers and industrial facilities. The AtHoc platform will integrate with BBM and BlackBerry's enterprise portfolio and trusted global network to offer customers new capabilities for safety, security and mission-critical business communication.

First, the company will launch a flagship slider device, Priv, which will run on the Android operating system, bringing together the best of BlackBerry security and productivity with the expansive mobile application ecosystem available on the Android platform. In combination with BlackBerry's efforts to support Android for Work on the BES12 platform, the new device will offer best in class security for enterprise customers. BlackBerry expects the device to be available late in the calendar year in major markets in-store and online, and will release further details in the coming weeks. While the new device will provide a choice in OS to new and existing customers, the company remains committed to the BlackBerry 10 operating system, which enables industry-leading security and productivity benefits.

Second, the company will continue to develop and enhance the BlackBerry 10 operating system and is confirming plans to release platform updates focused on security and privacy enhancements, with version 10.3.3 scheduled to be available in March 2016.

The company anticipates modest sequential growth in total revenue in each of the remaining quarters of fiscal 2016.