First up is Twitter leakster Evan Blass, who posted multiple tweets claiming that the phone is codenamed Aero and will be released in early November. No less than six different color options, all presumably aluminum or similar metal, are shown off. Previous tweets from Blass indicate that this will be a 5-inch phone with a 1080p screen, a Snapdragon 617 processor, 2GB of RAM, 16GB of storage plus a MicroSD card slot, a fingerprint reader, and a somewhat paltry 2150mAh battery. The small battery makes sense given the quoted 7mm profile - the One M9 is 9.61mm thick, for comparison.

So with the relatively small screen and skinny build, this is clearly a form-over-function device, and the size would seem to indicate that it's aimed squarely at the base model iPhone. It's unfortunate, then, that HTC was unable to trim the huge top and bottom bezels on the front of the device. Instead of the company's standard "Boomsound" stereo front-facing speakers, we get a conventional earpiece and a Samsung-style fingerprint reader/home button with an HTC logo above it. That would seem to be confirmed by leaked "in the wild" photos posted to French leak site Nowhereelse.fr. 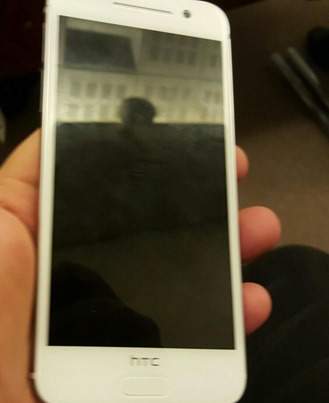 Blass says that the A9 will come to Sprint in November, and it's hard to imagine HTC (even in its lamentably reduced state) releasing a major phone on just one carrier. Expect an announcement from the company sometime in the next month or so.