In version 39, Chrome for Android learned an awesome trick: using a simple HTML tag, any webpage could tell Chrome to theme its UI (and your device's status bar) with a specified color. The downside to this feature was that it only worked if tabs and apps were "merged," meaning your Chrome tabs would show up inline with your recent apps, rather than relying on Chrome's own in-app tab switcher.

Today, a Chrome for Android developer at Google let Reddit know that the theme-color attribute will soon make Chrome snazzy even if you don't have tabs and apps merged. Right now the flag (chrome://flags/#enable-theme-color-in-tabbed-mode) will only work in Chrome Dev 47.0.2516.0 (available from the Play Store or APK Mirror), and support isn't complete yet - the flag won't allow Chrome to theme your status bar and swiping across the toolbar to switch tabs is a little glitchy, for instance. Otherwise, it already seems to work pretty well. 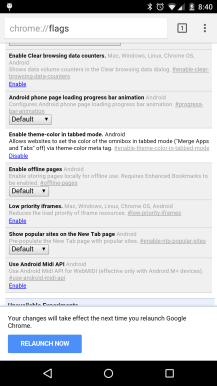 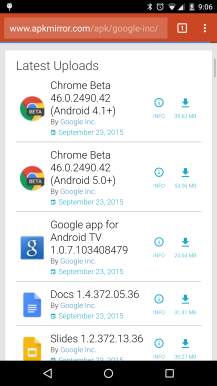 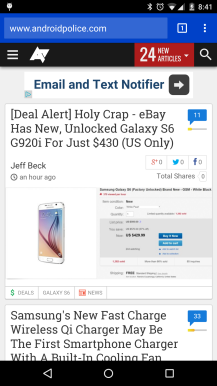 Until the flag graduates out of the Dev builds, /u/aurimas_chromium asks that users report any bugs in the Reddit thread linked below. Those interested can read more about the technical and design challenges behind theme-color (and a lot more) in Sebastien Gabriel's Redesigning Chrome for Android.