There are a number of very good Reddit apps in the Play Store, but it's no secret Reddit itself is interested in making apps. After releasing an official AMA app a last year (then alienating the AMA moderators), the company is now working on a general Reddit browsing app. Admin dforsyth posted a screenshot of it yesterday, and it looks okay. 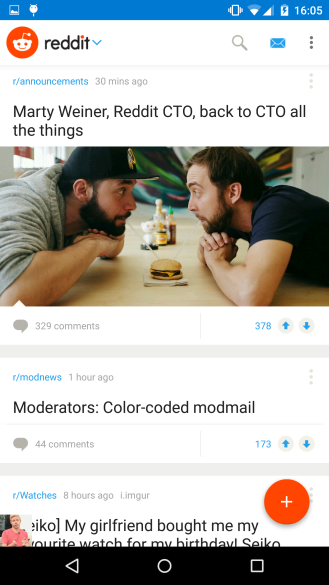 It's hard to judge from this one screenshot, but the app has a smattering of material design elements. There's a FAB and the status bar is colored. However, the toolbar below that is white, and there doesn't appear to be a hamburger menu on the left. Don't worry, though. Reddit has been made aware of all this by representatives of /r/androidcirclejerk, who were on the scene mere moments after an insufficiently material app was detected. Praise be Lord Duarte.

The app is still a work in progress, so let's not be too harsh on the design. It certainly shares some DNA with the new mobile site, which is a pretty nice experience. Although, it's going to be tough to match what the developers of apps like Sync for Reddit, Relay, Reddit is Fun, and others have managed in the last few years.

[Upcoming Deal Alert] Amazon Prime's Price Will Be Slashed To $67 For One Day Only In ...

Telegram v3.2 Brings Channels For Broadcasting Your Messages To The World