Mozilla advances another version in their rapid release cycle today, moving the stable version of Firefox for Android (and desktops) to v41. Unlike some other recent releases, this one has several goodies for regular users. These include a modification to in-browser search that makes it more like using the dedicated search bar in desktop Firefox, offering an easy tap-to-choose selection of different search providers. 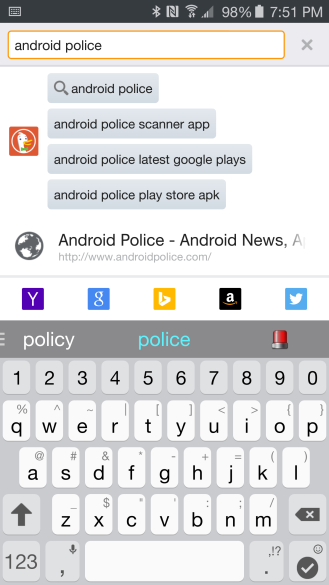 To be honest, I think this is a lot more useful on mobile than it is on the desktop. The moments, taps, and typing saved are a lot more precious when using your phone.

Another highlight is the ability to search your saved logins when there are no matches. I couldn't replicate this in my usage, but I don't have many things saved outside of LastPass. Another new feature that is discussed but hard to find is the supposed improved bookmarks manager with duplicates detection.

A real improvement that will be appreciated by frequent users is that Firefox now deals with intent URIs correctly. That means when you click a link designed to open up in an app, the app opens. The typical behavior in prior versions of Firefox is to just have an app link in the address bar. This is still there in v41 for situations in which you didn't get to the page via an intent URI.

The last thing I want to mention is more anticipatory. This release features a new API for developers to create add-ons that make their own home screen tabs, expanding on a nice built-in feature. We will have to wait for this to bear fruit, but it is something worth keeping an eye on.

[Exclusive] Here Is The Nexus 6P In All Its Glory, Front And Back