Have you ever felt like regular emoji just aren't descriptive enough? Skype has something you might be interested in. The new Mojis are short animations from a variety of films and TV shows that you can insert into IM conversations. They're rolling out now on Android, as well as all the other Skype platforms.

You can think of Mojis as GIFs with sound. Just tap the Moji button and browse by movie or expression. You can preview the Moji before inserting too. The first wave of Mojis come from the likes of Despicable Me, Bridesmaids, Pitch Perfect, Jurassic Park, and The Muppets. There will be more coming in the future as well.

Skype didn't specify what version of the Android client is required, but v6.2 is rolling out now. It's on APK Mirror, but we're not seeing Mojis in there yet. It's possible there's a server side switch that needs to be thrown.

Skype has also announced that v6.2 for Android contains a few notable changes. The new media bar makes it faster to send files, photos, or your location. Some phones will also be able to display an unread count on the Skype launcher icon (Samsung, HTC, Sony, and Xiaomi phones). 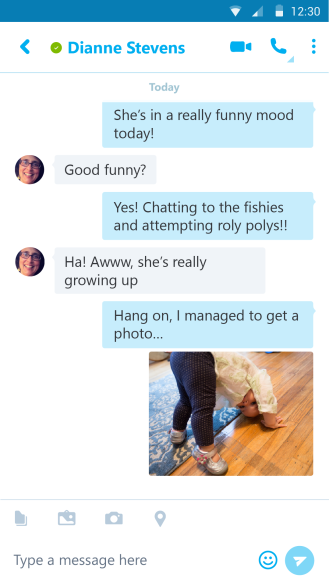