Remember when HTC had its Hot Deals discounts in July and everyone tried to grab a Nexus 9 for 40% off? Well, the deal is back and you better hurry because the stocks seem to be depleting as I type this. Right now, only one color of each 16GB (black) and 32GB (white) Nexus 9 remains available, while the other is gone, gone, gone. If you're too lazy to do the math, you're looking at paying $239.40 instead of $399 for the 16GB, and $287.40 instead of $479 for the 32GB. At those prices, the tablet's flaws sort of disappear from the equation.

Now that we got this out of the way, I'll let you know that the Hot Deals do involve one other device. The One M9 is going for 25% less ($486.75 instead of the exorbitant $649) with a bonus $100 Play Store credit so you can buy all the apps, games, movies, books, and TV series that you (and/or the Snapdragon 810) can handle. Beware though that the discounted price won't show up until after you add the device to your cart, like so: 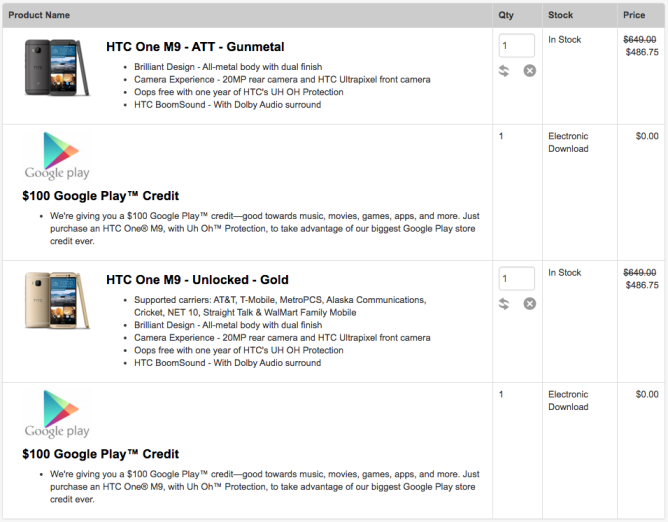 Like last time, the Re Camera also sees its price slashed in half to $99.5 and all accessories (cases, car chargers and holders, audio accessories) are discounted by 50% too. The sale ends today, September 15th, so you better make your mind fast before all these gadgets go back to their original crazy prices.