Android's flagship smartphones tend to have a battery life problem. The standard often isn't how many days they can last, but whether they can make it through a single one. Budget smartphones, with their weaker processors and lower screen resolutions, often last longer—but not everyone is willing to sacrifice performance and picture quality for battery. Those people can instead slap an external charger to the back of their phones and wrap it up with plastic. We call this approach buying a ZeroLemon case.

The company, which also produces solar-powered external battery packs, has announced oversized cases for two additional phones: the Nexus 6 and the LG G4. The former gets a relatively slim 3,500mAh case that's currently selling on Amazon for $35. ZeroLemon says this should extend the phone's battery life by 75%. 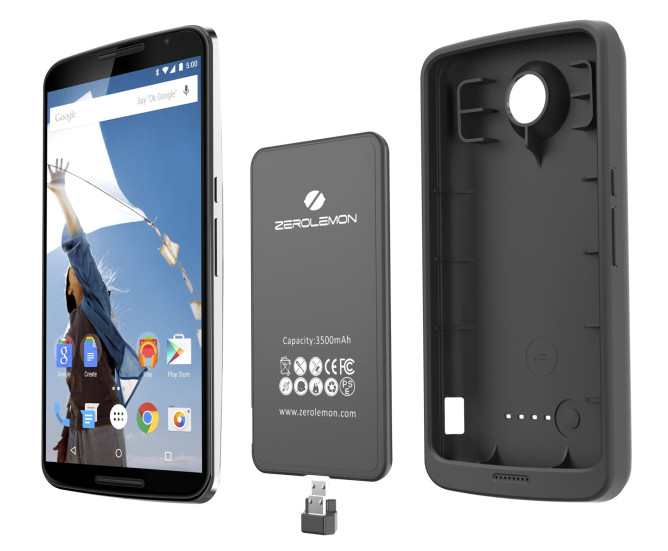 The LG G4 gets a more substantial 8,500mAh suit of armor priced at $60. Here, ZeroLemon's goal is to provide three times the capacity of the device's original battery.

Since these are cases, they provide you with added protection against drops and everyday abuse. As for whether you should buy one, that depends on the size of your purse or pockets.

The product package also includes a soft shell TPU case. This protects the phone during normal use and in case of any drops.

The package features the power pack, soft case, a U shape USB power connector, and earphone jack adaptor. A 365-day ZeroLemon Warranty Guarantee is provided by the company.

In addition, the external power source features an LED to indicate energy level.

ZeroLemon is the creator of the first Tri-Cell Battery Design for smartphones. The Nexus 6 3500 mAh power pack will be available on Amazon on 10th Sept. 2015. More information can be found at click here.

The LG G4 8500mAh TriCell Extended Battery is the world’s highest capacity LG G4 Battery. That’s a full 2.75 times more than the original battery capacity with a case that is slimmer than any other manufacturer’s extended batteries. It also comes with a ZeroShock Rugged PC/TPU Dual Layer Case and the 180 day ZeroLemon Warranty. Not only is this battery compatible with all LG G4 variants, NFC is built into the battery allowing for all functions the LG G4, such as S Beam and Google Wallet to be activated.

“We’re excited to be offering this extra power extension,” states a high level ZeroLemon company sales spokesperson. “Not only is it slim and good-looking, users can rest assured they are being provided with the ultimate in protection while using this 8500mAh Extended Battery.”
ZeroLemon has specifically designed all their 8500mAh batteries to offer an additional 110% charge. Of course, actual battery life will vary depending on the individual hardware, software and network conditions, but users are guaranteed to get more than 3 times the capacity of an original LG G4 Battery.
The case is durable and may sustain significant drops and everyday abuse. There is a very thorough and easy to follow manual explaining just how to insert and remove the battery available for download on the company’s website.

ZeroLemon products are designed by Tech-savvy professionals to meet the discerning needs of Galaxy LG G4 users at an everyday value price. ZeroLemon, the world’s only manufacturer to integrate both back cover and case into one for ultimate protection also offers a 180 day money back satisfaction with their product.

[Update: It's Official] The Original Moto X On Verizon Is Finally Getting Android 5.1 Via A ...