Cortana, named after an AI character in Microsoft's Halo series of shooters, debuted on Windows Phone hardware before graduating to a headline feature in the desktop version of Windows 10. It performs much of the same functions as Google Now, with voice searches and commands plus quick access to personalized results for weather, news, sports, and other dynamic web content. Cortana is available as an Android app, but without the deep integration at the OS level which Google Now enjoys, its utility is more limited. 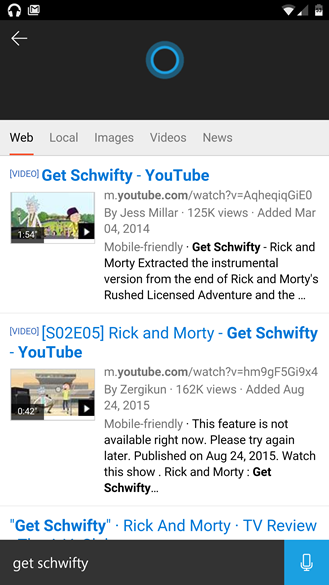 This is a win-win for both parties, assuming that Cyanogen can get Microsoft's software working at a deep level. Microsoft gets legitimacy for Cortana as a platform-independent tool that's pre-installed on several phones in international markets, and Cyanogen gets another large chunk of Android's functionality from a non-Google source. (That's assuming that Microsoft isn't giving any financial incentives to Cyanogen for promoting Cortana.)

Presumably it will be several months before we see this partnership come to fruition. Cortana is still in beta on Android - you can download the APK directly from APK Mirror.

Latest Google App Offering Up New Notifications For Some Users

A Deep Dive Into Google Photos: Not Your Grandma's Photo Album