Do you remember how happy everyone was when the first Android M developer preview had a dark system UI mode? Get ready for the exact opposite of that feeling. A reply to the issue tracker thread indicates that Google won't be making the dark theme available in Android 6.0. It might still happen in the future, though. 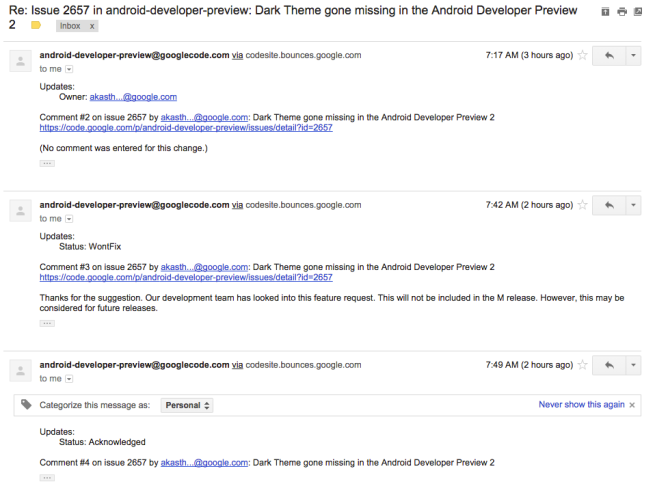 Issue 2657 was opened when the second dev preview dropped the dark UI option. You can see in the above conversation that the status of the issue was briefly marked as "WontFix." That was a little harsh maybe, so it was changed to "Acknowledged." Apparently the feature was reviewed by the engineering team and was removed from the 6.0 release. It might still make an appearance in a future version of Android, though.

So, for the time being, the retina searing white UI will continue to be your only option. No explanation was provided as to why the feature was pulled, but it was only a developer preview. There was never any guarantee the dark UI would be in the final build.

Play Newsstand 3.4.4 Is Live In The Play Store, Adds Scores And News About Your Favorite NHL, ...