A late afternoon update to the Play Store just hit the scene. While we've only witnessed a single new dialog box in the live app, there are plenty of things standing out from a teardown. Preparation for Android 6.0 is clearly a big part of this release as signs pop up for support of the new optional permission model and fingerprint readers. There is also an uninstall manager in the works for those times when you've run out of space. We can also look forward to a new interface for requesting refunds and an option to get very precise recommendations based on location. And if you just can't wait to get the latest version, hit the download link below. 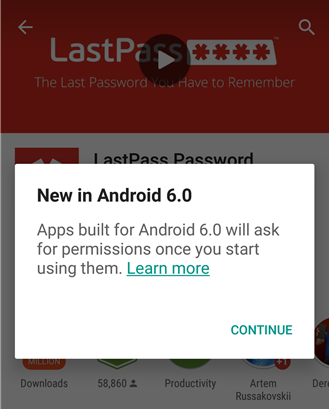 If you're looking for something new in the latest Play Store, and if you're using Android M Developer Preview 3, check out any app that targets API 23. A popup appears the first time one of these apps is downloaded, letting users know that their experience will be a bit different with the new permission model. For now, the list of apps is limited mostly to Google's own line-up, LastPass (pictured above), and a rare few others who have been quick to get updates out since the release of the SDK a few weeks ago.

The new Play Store adds a handful of new permissions that may be of interest. Most of these additions are dedicated to reading SMS messages and the contact list. This is almost certainly related to the App Invite system announced back in May, which can use this information to show those recommendations right in the Play Store, along with who sent them. Another permission is used to get size details about apks installed on the device, but we'll get to more detail about that one shortly. Finally, there is one for accessing Fingerprint readers, and that's where this teardown really starts.

Android M has plenty of headlining features, but the two we've been talking about constantly are the new optional permissions and built-in integration with fingerprint readers. If nothing else, the leaked images of the LG Nexus 5X and Huawei Nexus 6 (or whatever they will be called) are a constant reminder that we can expect overly obvious reader panels on many of our phones for the foreseeable future. With this knowledge, we could have easily guessed that the Play Store would soon accept the tap a digit to skip those obnoxious password prompts when we buy a new app. Now we have our evidence:

The important line simply reads, "use fingerprint for future purchases," which removes any doubt that the Play Store will offer the same purchase flow iOS users now have with the App Store. Most of the remaining text is instructional, with a few lines dedicated to basic error messages.

This function doesn't appear to be working with existing devices with fingerprint readers, but it's likely Google simply hasn't turned it on yet. We'll have to wait to find out if Android 6.0 APIs are a requirement or if OEM implementations like Samsung's will also work.

We live in a world with apps that keep getting bigger and built-in storage that's not exactly keeping up. Between phones with 20 MP cameras and games that regularly average between 400 MB and a couple of gigs, it's easy to run out of space. Google knows this and plans to assist in some basic management. There is an upcoming feature called "Uninstall Manager" that will make it easy to pick out the overweight apps that get in the way the next time you're trying to install something.

The Uninstall Manager will most likely appear when an app fails to download or install due to shortage of available space. A look at the layouts reveals that it will be fairly simple in nature. There will be a list of apps and their physical size on the device, along with checkboxes next to each. Selecting each app marks it for uninstall. Once enough have been chosen to make space for the incoming app, a tap of a button will finish the task.

This interface focuses on apps, but doesn't acknowledge other potentially problematic consumers like photos, music, and video. Uninstall Manager doesn't seem to be live yet, or at least our tests weren't able to make it appear.

Many years ago (well, three), the Play Store began experimenting with recommendations based on your friends and location. Now it looks like there's a little more motion on that project, so to speak. A new setting is being prepared (not yet visible, but it's there) that can enable or disable the use of "precise location" to generate recommendations. The description specifically references the use of GPS. No other details are given, but we can probably expect to see more about this in the near future.