It's really an incremental update, but it's a pretty significant incremental update...if that makes sense. The extra gig of RAM was definitely much-needed, and the addition of LTE is always a welcome one. Without getting into too many details, I can already tell you that it's probably worth upgrading if you're carrying the original Vivo Air and like it.

But if you want the details, let's talk about those now. 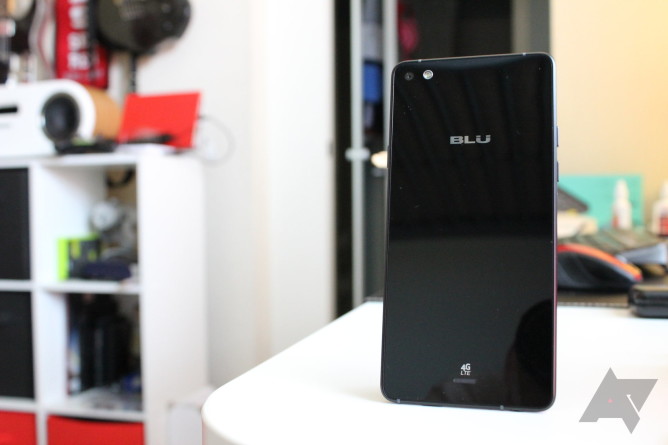 Unsurprisingly, the Vivo Air LTE looks almost identical to the original Vivo Air. At 5.1 mm, it's super thin, and at only 98 grams, it's equally as light - pretty much what you'd expect from a phone that's technically succeeding the thinnest phone on the market at release time.

But the biggest change aesthetically is my personal favorite: the capacitive keys have been replaced by on-screen navigation. For this, I am thankful. So, so thankful. 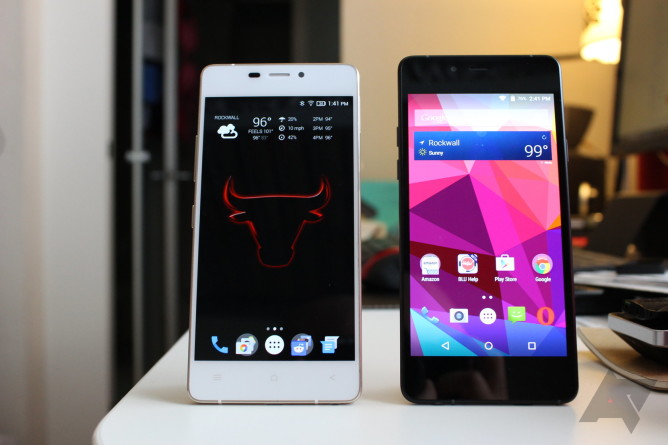 And of course there are the differences under the hood: processor, LTE, and RAM. Two of those changes are good, and there's no real argument to make there. The other, however, is a little more questionable.

Naturally, I'm talking about the move from the octa-core Mediatek MT6592 to the quad-core Snapdragon 410. There are things to like about the Snapdragon - like Qualcomm's habit of actually releasing the source code, for example - but there are also things to like more about the Mediatek...like performance. But we'll get into that below.

The displays of these two phones are basically identical, which really isn't a bad thing - I love the Vivo Air's display, so by default I love this one too. While the cameras are identical in megapixel count, I think the Air LTE's 8MP shooter is actually better - images just seem to be brighter and sharper. Here are some sample shots from its camera (and for comparison, here is a link back to the camera section of the original Vivo Air review). The Vivo Air LTE is running Lollipop (5.0.2) out of the box (which the Vivo Air should be running by now, but Blu still hasn't pushed the update), but unlike its predecessor, is sporting a basically stock system. That's good, because Lollipop is too beautiful to throw some tacky-looking skin on top of. 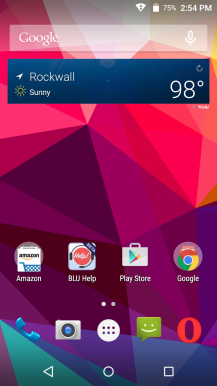 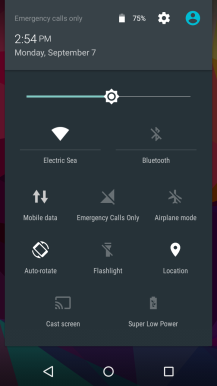 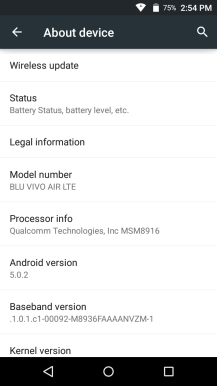 Basically, the primary additions that you'll find on the Air LTE are options to add battery percent to the status bar and scheduled power on/off settings. Oh, and it has a different keyboard - Touchpal 2015. I actually kind of like it, to be honest.

Otherwise, it's stock everything.

But now it's time to talk about performance. Like I've already said, the additional gig of RAM was really needed the first go around, so I'm really glad to see that Blu added it here. I wish they would've doubled the storage, too, because 16GB is just not enough. 32GB should be standard across the board at this point.

And then there's the processor. I'll be the first to admit that I'm not a big fan of the Snapdragon 410, especially when compared to the octa-core Mediatek stuff Blu has been using in most of its newer handsets. Compared to the quad-core Mediatek stuff (like the one in the Studio Energy, Studio G, Vivo Seflie, Energy X Plus, etc.), however, it's actually better. So, really, like I said about the Life One, which uses the same processor - it's right in the center of Blu's catalog: slower than things like the original Vivo Air, but faster than some of the other recent phones with a quad-core Mediatek. I guess you can slice that however you want.

While I don't invest a lot into those numbers, they translate to real-world use here: the Vivo Air is simply faster than the Air LTE. But, it's severely lacking in the RAM department, and the Air LTE has a better camera. So, really, I guess it's a wash.

Overall, the Air LTE is a good upgrade to the original Vivo Air, though I have to say I'm disappointed in the processor change - I wish they would've at least gone with a 610 (or something else with more oomph). The 410 just leaves me wanting, where the original Vivo Air never made me feel that way, at least not when it came to horsepower. The RAM, of course, is a different story.

So yeah, I'm glad to see the additional gig of RAM here, and the improved cameras are also a nice touch. I also like that Blu got rid of the physical keys and upgraded to on-screen navigation, and Lollipop is also a nice touch here. The Air LTE is slated to get Marshmallow in the first quarter of 2016, so let's hope that Blu sticks to that plan - considering this phone is running a Qualcomm chip, it shouldn't be too difficult to get everything running pretty quickly.

But the real question is: should you buy this phone? Well, if you're in the market for a $200 phone with a beautiful display, good camera, excellent build quality, and decent performance, all without having to give up LTE? Then I say yes. Honestly, the only "dealbreakers" I see here are the 410 and the limited storage, so if you can get past that, then there's no real reason to not consider this handset. 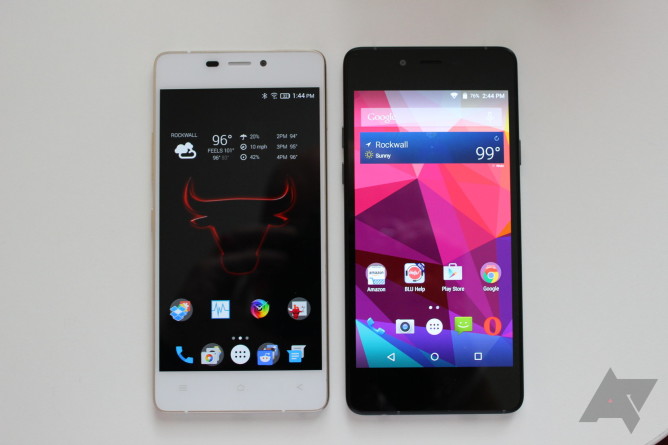 MIAMI, Sept. 8, 2015 /PRNewswire/ -- BLU Products, the market leader in unlocked devices in the United States, announced today the follow up to the popular ultra-thin Vivo Air Series. The new BLU Vivo Air LTE is currently on display at the CTIA Super Mobility event in Las Vegas, at BLU Booth # 3715. At just 5.1mm, including the camera, the Vivo Air LTE is the thinnest and lightest (97g) 4G LTE device to launch in America.

"The BLU Vivo Air LTE is the most striking and remarkably beautiful smartphone device in the market today," said Samuel Ohev-Zion, CEO of BLU Products. "Everyone who sees this phone will stop and be amazed at the unique work of art which is displayed."

The BLU Vivo Air LTE has several improvements from the previous model, particularly the addition of 4G LTE powered by Qualcomm Snapdragon 410, and an upgrade in memory to 2GB RAM, while maintaining the same $199 price point as the original Vivo Air.

Sold exclusively by Amazon.com, the BLU Vivo Air LTE will be available for purchase immediately on presale, and shipped beforeSeptember 22nd to customers who purchased.

Consumers who wish to pre-order the BLU Vivo Air LTE can visit the following link:

Machined out of one solid block of aircraft grade aluminum using the latest CNC and antenna technologies, then covered with Corning Gorilla Glass 3 cover on both the front and back for improved damage resistance, the BLU Vivo Air LTE is composed entirely of Aluminum and Glass with no plastic visible.  The result is a remarkably premium and beautiful device with a lasting first impression and unique feel in hand.

Powered by a 64-Bit Qualcomm Snapdragon 410 processor that is designed to provide blazing fast 4G-LTE speeds, high performance, and battery efficiency, coupled with a 4.8-inch Super AMOLED display with 306ppi, resulting in an extremely vivid and bright viewing experience. An 8 mega pixel Sony IMX219 main camera sensor plus 5 mega pixel front facing camera provide all the capture of memorable moments. Inside its revolutionary thin design is a 2,050mAh battery to keep going an entire day without needing to charge. Super Low Power Mode allows the VIVO AIR LTE to stay powered on for hours or days on end with access to Voice Call, Contacts, SMS and Alarm. The Vivo Air LTE will be launching with Android Lollipop, but will be receiving Android M over-the-air update in Q1 2016. GSM and 3G HSPA+ is supported globally on all GSM Networks. 4G LTE is supported nationwide on T-Mobile's network which includes Metro PCS, Straight Talk, Simple Mobile, and others with LTE bands 2 and 4. Support for AT&T 4G LTE is limited to markets where AT&T has deployed Bands 2 and 4. Check with the service provider. Several Global markets are supported for roaming with LTE Band 7.

Google Is Testing Proper Post Sharing To Apps In Google+ For Android, Which Rather Annoyingly ...