This feature has taken us a long time to confirm, readers - sorry about that. Testing it would have required us to call 9-1-1 for the sole purpose of testing out a neat new tool on a smartphone, and aside from being extremely illegal, none of us wanted to explain to a hard-working emergency dispatcher that we were using a vital service to write up a blog post. And on that note, please, please don't test out this feature on your own Android M preview build. We're only sharing a screenshot sent in to us by a reader which we assume was taken during an actual emergency.

Now, go up there and read that part where we told you not to try this feature out just for fun again. Seriously. Don't try this at home.

As of Android M Developer Preview 2, the stock Android 6.0 dialer appears to exhibit some special behavior if you dial 9-1-1 or another registered emergency number. Once you do, the name of the local emergency service center will appear on the screen, overlaid on a GPS map of your current location. This is an excellent addition - in an emergency people are often under extreme stress, and providing an exact address to a 9-1-1 dispatcher can be difficult. 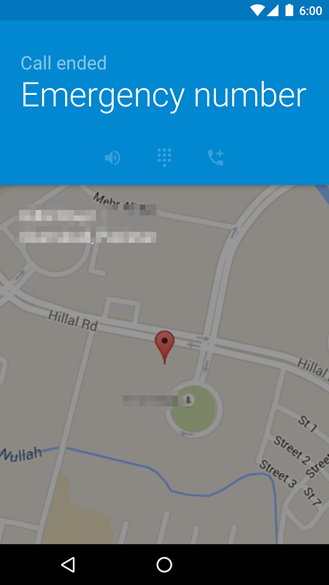 Modern E-911 systems should automatically display your approximate location to a dispatcher, but this feature can help you give exact instructions. It will also help you to know exactly which service center you're talking to - while most dispatch centers can re-route remote ambulance services, firefighters, and police just about anywhere, you may not actually be talking to the center closest to your physical location, especially if you're calling from a rural area.

At the moment we've been told the functionality works in the United States, and the screenshot above is from Pakistan (which uses 1-1-5 as its emergency number), so presumably the emergency aid feature will rollout in multiple countries when Android Marshmallow launches. It's also safe to assume that third-party dialers would break this feature.

It's possible that this feature is active on Android 5.1 or lower, but we've only been tipped by Developer Preview users so far.