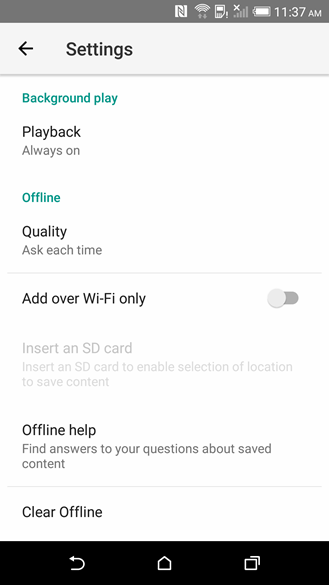 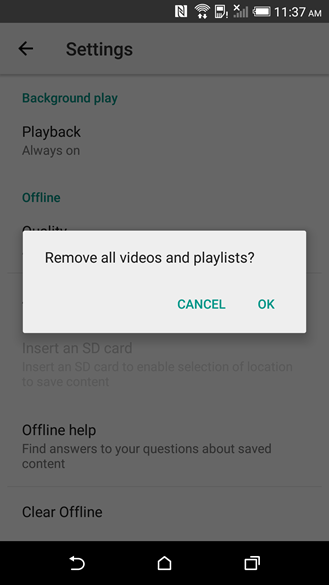 A new action has been added at Menu -> Settings -> Background & Offline -> Clear Offline. If tapped, it gives an option to remove all videos and playlists stored on a device for offline playback.

It makes sense to have this feature as a quick way to wipe the slate clean, but it seems like it should also be available in the overflow menu of the Saved Videos screen where people would be more likely to use it. There's currently no way to quickly remove multiple individually downloaded videos, they can only be deleted one at a time using the mini-overflow menu on each video in the list. Note, whole playlists can be removed with a single action.

I'd like to see both an action to clear all offline videos and a long-press to start multiple selection for quickly clearing out just a portion.

While we're on the subject of offline videos, the latest YouTube update appears to be testing automatic downloads of videos based on playlists. The feature is called "Playlist Autosync" and it's currently hidden in a settings screen reserved for developers.

As for precisely how the function works, that's not spelled out in the strings, but it's very likely that it will operate just like synced playlists in Google Play Music.

For those who may not have used this feature in the Music app, individual playlists can be configured to store offline copies of songs on the device. If a track is added to one of those playlists on another device or through the web player, each device configured to keep an offline copy will automatically begin downloading that track (or queue it up to download when it connects to Wi-Fi). 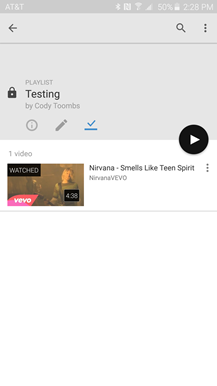 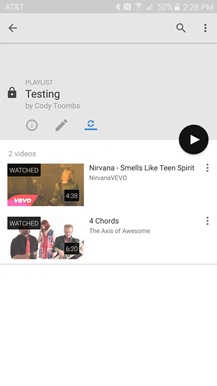 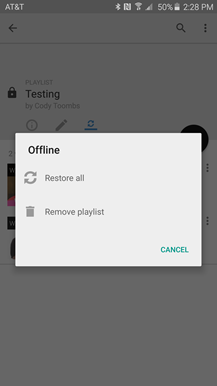 Left: playlist is in sync. Center: after adding a video from the web player. Right: tapping "Restore all" begins download.

YouTube currently doesn't offer automatic syncing. If you open a playlist that's stored offline and something has been added to it elsewhere, a little icon will switch from a check to a refresh button to indicate there is a discrepancy. Tapping on the icon opens a dialog with an option to "Restore all", which begins a download of any videos that aren't currently stored locally.

Since videos have much more significant storage implications than music, I expect a toggle will remain even after testing is complete and automatic sync is enabled for public use.

[Weekend Poll] Will (Or Would) You Use Android Pay When It Launches?