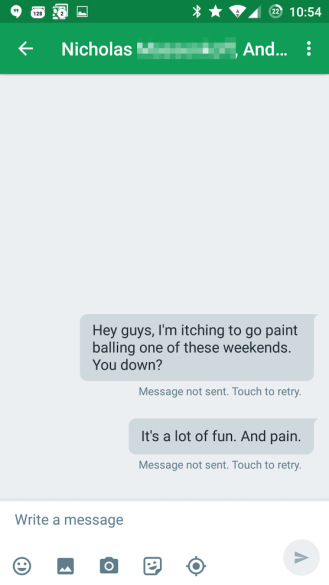 Anything other than a standard text message to one single recipient counts as MMS. That means picture messages, video messages, group texts, all count as MMS and are handled differently by carriers than a traditional SMS text to a single recipient. After upgrading to Hangouts 4.0, some users are now unable to send or receive any kind of MMS message.

Google is aware of the issue and there is a fairly lengthy thread on the Hangouts Help Forum where users have volunteered many tricks and tips that can help solve this issue, including:

Unfortunately, none of these workarounds seem to work for everyone, but if you're having this problem, trying them could well be worth your while. If the workarounds prove fruitless, though, you'll probably be out of luck until Google rolls out a fix. The Hangouts team is actively investigating the issue, so hopefully that means we'll have a resolution soon.