It's been a while since we've seen Samsung do anything in the high-end tablet market; in fact, the original Tab S was probably the last flagship tablet the manufacturer released. But today marks the nationwide availability of that tablet's successor(s), the Tab S2 9.7 and S2 8.0.

As the names suggest, this pair packs 9.7-inch and 8.0-inch displays, respectively, both using the 4:3 aspect ratio that many users crave (and equally as many users hate). Otherwise, these are both packing some pretty intense hardware under the hood:

Naturally the primary differences between the two are display size and battery size - the larger of the two is packing a 5,870 mAh battery, while its little brother has 4,000 mAh.

Also, both have physical buttons. Sigh. Now, if you've been waiting to pick one of these badboys up, today's the day. They're already available at carriers and retailers across the board, including T-Mobile, Verizon, AT&T, Sprint, Amazon, and Best Buy. It's worth noting that if you're looking to pick up the 9.7-inch model with 64GB of storage, you'll have to get it directly from Best Buy, as it will be offering that version of the tablet exclusively. 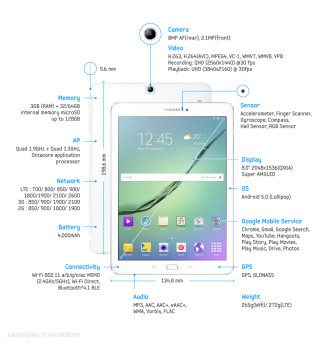 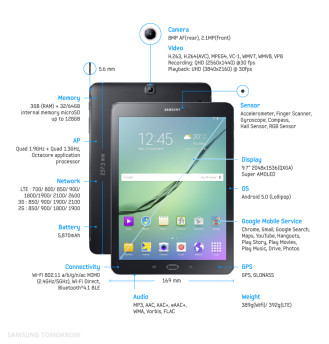 Otherwise, you'll find a list of links below. Happy buying.

Wacom Announces The Bamboo Spark, A Pricey Pen, Pad, And Case Combo That Lets You Record ...