Anyone who has to pore over data on a regular basis knows that it's a best practice to look at some graphs, run basic descriptive statistics, and just generally play around to make sure you aren't missing anything obvious and to assure yourself that there are no mistakes in data entry. This can get really repetitive and sometimes corners get cut. Google is trying to make it easier for you as they have automated the process in Sheets for Android and the web.

All you have to do in the Android app is tap "Explore" in the overflow menu. After that, you'll be presented with a series of charts with summary information to let you know what Google thought you would find interesting. First, here's a sense of the data I'm working with for our example. This comes from tracking the battery drain over several months on my Macbook Air. 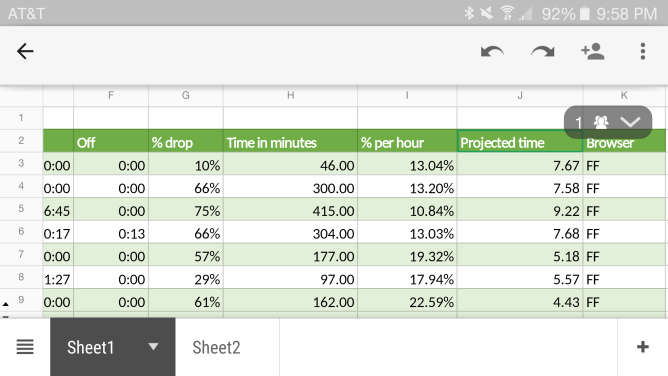 After starting the explore process, not every chart Sheets gave me was useful or even logical. Rather than dwell on the obvious—of course an automated system won't be 100% accurate in understanding the relationship between so many different columns—here are some of the good insights it provided. 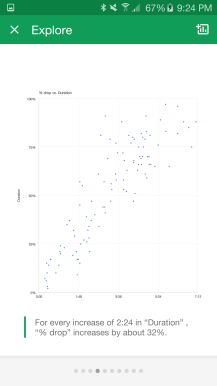 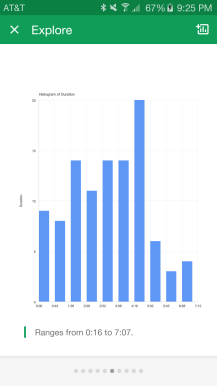 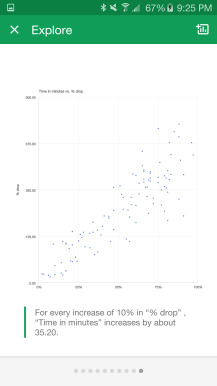 To summarize these charts, the first and last involve Sheets realizing that I was interested in the relationship between the time the computer was running and the percentage drop in battery life. The middle screenshot is a histogram of the total battery life, the type of thing you should look at before going any further but may overlook to avoid the pain of setting up the chart.

If you want to add a chart found via Explore to your spreadsheet, just hit the button on the top right.

Another feature that has made its way to Android and the web is an easier method for performing calculations. If you want to calculate the sum, average, count, or maximum/minimum of some cells, highlight the ones of interest and then you are just a tap or two away. Just look for the fxsymbol in the lower left hand corner, as you can see below.

And that's not even all. You can now enjoy data validation, which means you can specify the range of acceptable values for any given cell. Sheets can reject or warn anyone editing those cells if the entered content doesn't meet the criteria. Another detail is the ability to partially format the content of a cell, such as having one word in a cell be in bold and the other portion italicized.

These features are included in the latest stable version (1.4.352.09.34) of Sheets for Android, but sometimes it can take a few days to reach you via the Play Store. If you can't wait any longer, grab it at APK Mirror.