This more casual smartwatch is the Moto 360 Sport, according to @upleaks. It looks not too dissimilar to the Sony Smartwatch 3. Only this time you have a circular display, flat tire still included.

The Moto 360 Sport lacks the visible lugs of the standard model, but it does keep the crown somewhere around 2 o'clock. @upleaks says the Chinese variant will support iOS but does not make such claims regarding the international one (but that seems increasingly likely).

The leaker says the standard Moto 360 will launch in September, with the Sport following up two months later.

Just when you think you know all there is to know about the upcoming Moto 360.

@upleaks has since shared two more images of the Moto 360, which show the underside of the device.

As for the Moto 360 Sport, here we see that the metal frame still resides underneath the plastic band. Aspects of the device that could be useful outdoors include 3ATM water resistance, GPS, and a barometer. 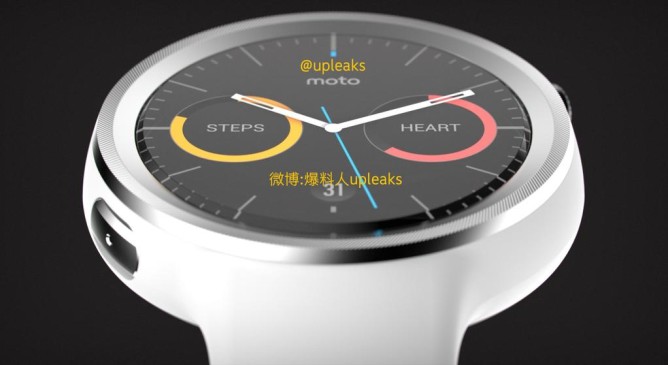 And here's the same watch from another angle.