When I was looking at local music players on Android for my roundup, I tried to find an app that would analyze your songs' BPM and let you create playlists accordingly, but couldn't land on one that did the job well. Both DjRun and RockMyRun use BPM to build their playlists, but they are geared toward running and active lifestyles. What if you just wanted slow mellow songs to chill to? Or fast uptempo music to ease your homework struggle? There didn't seem to be an alternative that fit the bill quite well, until Splyce came along today.

Although it has been available on iOS for a (long) while, Splyce has just made the jump to Android. And to be honest, they didn't do an excellent job. The developer the company hired for this switch doesn't seem too concerned with Material guidelines or Google's design philosophy. It seems that he/she just took the iOS app's graphics and made the buttons and code work on Android (some graphics are even visibly low-res on my G4's 2K display).

But that's not exactly why you'd use Splyce in the first place. The app analyzes the songs you add to it, retrieves their BPM and audible profile, then lets you set up how exactly you want your mix to play. You can choose to play them at their own BPM, or have them try to meet (as much as possible) a specific one for the entire playlist or adapt to the next song. After that, you select to play tracks for 60, 120, 180, 240 seconds or for their entire length, if you want to avoid getting bored of a specific tune. You can also set the different transitions and time them to 10 or 20 seconds. And finally, you'll pick the playlist's order from slowest to fastest, vice versa, or via manual sorting. 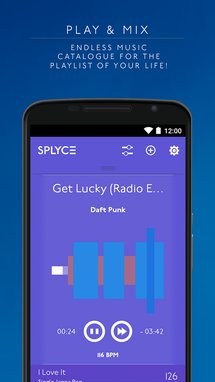 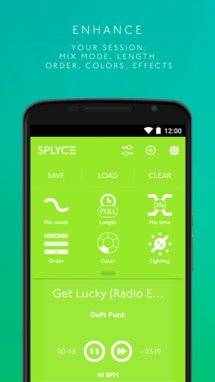 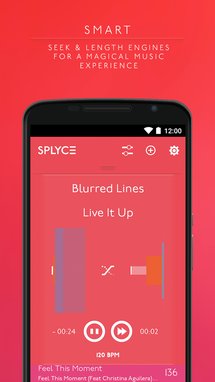 After you start playback, you'll see how much of the song has already played and how much is remaining until the next one. There are no rewind buttons, just a pause one and a skip button to jump to the next track. Tap the song's name and you'll be able to expand the view to see its BPM signature.

Splyce offers a few settings as well, regarding playlist repetition, the app's theme color, and the transitions used. There are more options available, but they're locked behind small in-app purchases of $1-3 approximately. The smaller ones let you save your playlists, or add new transitions and search by BPM, or open up more themes, artwork in the lockscreen, and Philips Hue support. The bigger IAP unlocks all three levels together. 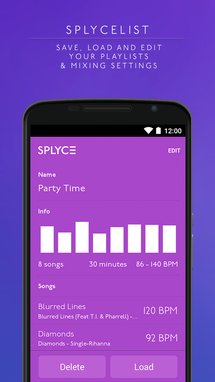 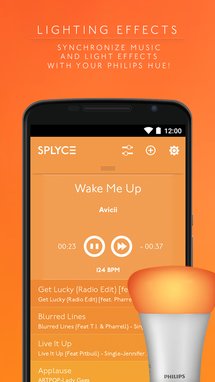 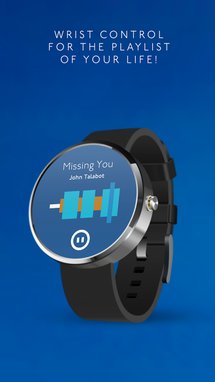 The basic functionality is free however, and it's enough for most needs and for you to glean whether this is an app you want to use more frequently and in a more specialized manner. To me, Splyce is basically an automated DJ for my music, and I really like the idea. I finally have a reason to transfer some of my songs to the MicroSD card I have in my phone.