Google has officially announced Android Wear for iOS, and above you can see a picture showing as much - an iPhone 6 running what looks to be an Android Wear app connected to an LG Watch Urbane. Wear for iOS is compatible with the iPhone 5, 5c, 5s, 6 and 6 Plus devices running iOS 8.2 or higher.

Here's a look at it on the upcoming Huawei Watch, showing a Hangouts conversation, as well. 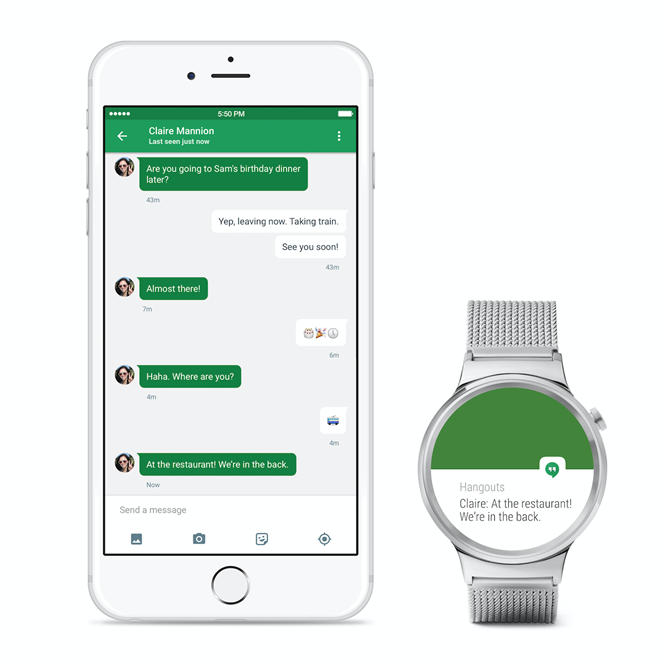 For now, only the LG Watch Urbane is supported for Wear for iOS, and it sounds like that'll be the case until new Wear devices come out.

Today, Android Wear for iOS works with the LG Watch Urbane. All future Android Wear watches, including those from Huawei (pictured above), Asus, and Motorola will also support iOS, so stay tuned for more.

This suggests there may be a restriction in play with older Wear hardware in regard to iOS compatibility, and that essentially only future devices (again, Urbane aside) will be supported. We've asked for clarification on this point (update: Google's statement), though to be honest, it's probably not a big deal - your average iPhone user likely isn't even aware Android Wear exists. A Google spokesperson had this to say about support for older Wear devices:

We wanted to make sure that iOS users would have a great experience with Android Wear out of the box. We’ve worked with manufacturers to ensure that the newest watches work really well with modern iPhones, but last year’s watches aren’t officially supported.

Wear for iOS isn't without restrictions, either - 3rd-party (non-Google) apps are not supported, and neither is Wi-Fi functionality, but Google says they'll continue to "develop" the iOS experience as time goes on. The Wear app (which is indeed a separate app) will be launching on the App Store later today (update: It's live on the App Store).

As pointed out by 9to5Google and several other outlets, while Google has stated that only the LG Watch Urbane is officially supported in the Wear app for iOS, other devices like the G Watch R and Moto 360 do seem to work and pair just fine. Google's statement, then, seems to be one of future caution: they aren't promising that Wear for iOS will continue to work for these watches, nor that the functionality will be 100% optimal.