A lot of people are excited about the Huawei Watch (which we've taken to calling the Huawatch around the Android Police virtual office). This is probably because it's the most watch-like Android Wear device that's been shown so far, and has a round screen that's actually round. All the way around. 360 degrees of roundness, you might say. Would-be purchasers have been waiting to buy one since the watch was announced way back in March, and the first pre-orders went live on Amazon earlier this week. 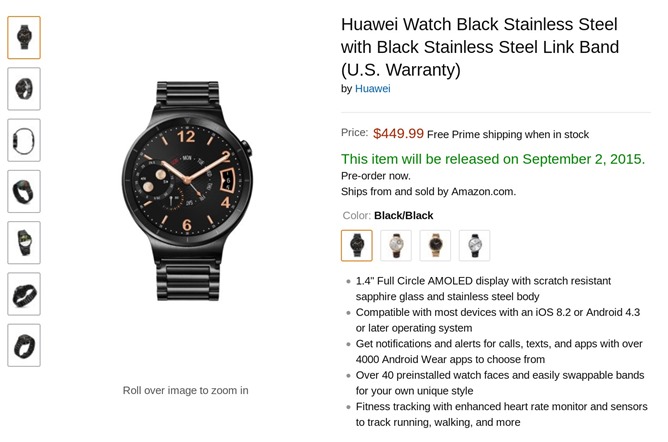 Unfortunately, those pre-orders were quickly dismissed by Huawei itself - the company said that it had nothing to announce, implying that the listings on Amazon (which quickly disappeared) and the September 2nd launch date weren't actually approved by the manufacturer. Now we're getting reports from multiple readers that those pre-orders are being bumped back to the middle of next month. One reader received an updated pre-order email with a delivery estimate for September 18th, a little more than two weeks later.

Hello,
We're writing about the order you placed on August 28, 2015 (Order#xxx). Unfortunately, the release date for the item(s) listed below has changed, and we need to provide you with a new delivery estimate based on the new release date:
"Huawei Watch Stainless Steel with Stainless Steel Link Band (U.S. Warranty)"
Estimated arrival date: September 18, 2015

That jives with previous reports that the Watch wouldn't be released until "late Q3 or early Q4" - a mid-September release would be about as late in the third quarter as you can get. This is just speculation, but it looks as if Huawei had some choice words for Amazon after the retailer jumped the gun, and Amazon is trying to let pre-order customers know as soon as possible that their Android Wear devices might be a little late.

The BlackBerry Venice Slider Leaks In All Its Android-Powered, QWERTY-Packing Glory