News spread back in June that Huawei was waiting until September or October to launch the Huawei Watch. Now the watch has appeared on Amazon, and it's showing a launch date of September 2nd.

Huawei has since come out with this statement:

Earlier today, incorrect information about the upcoming launch of the Huawei Watch was published on a partner website. We have nothing to announce at this time. Stay tuned for more details next week.

There are four color variants available for pre-order, with prices varying wildly between them. Stainless Steel/Black is the cheapest combination at $350. Solid black is next at $450. Gold/Brown follows at $700. Solid gold tops the package at $800.

Oddly, Amazon shows the Huawei Watch as compatible with iOS 8.2. If Android Wear were to work with iOS, that would surely be news. There's the possibility that the watch has some other form of limited connectivity that works with iPhones. Or this could just be a typo.

The Huawei Watch has taken over as Android Wear's latest Moto 360, the smartwatch that most looks like a traditional timepiece (moreso than the actual 2nd gen Moto 360). Like the LG Urbane, it packs a full circular display without the flat tire that limits the appeal of Motorola's watches. 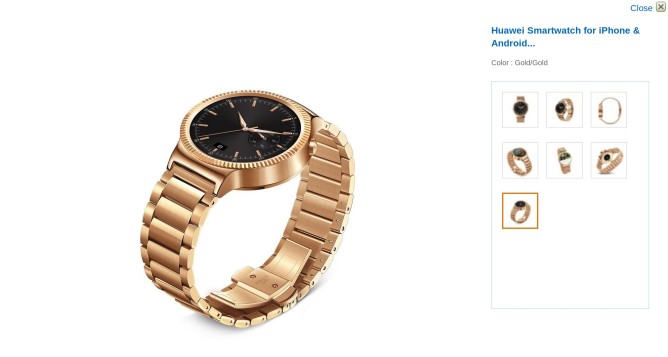 There's a chance this listing won't stick around, but you're welcome to place a pre-order right away and see what happens.

Two of the four colors have disappeared. Now we just see solid black at $450 and Gold/Brown at $700. That said, there's another color we did not see before. Stainless Steel is available for $400. 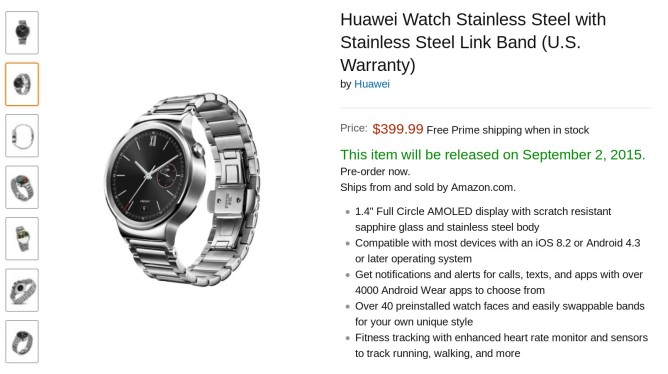