Another week, another free music album on Google Play. This time it's something a little more contemplative: a classical instrumental album from Yo-Yo Ma, probably the best-known concert cellist on the planet. You can grab The Sound of Yo-Yo Ma, which incidentally is exclusive to Google Play Music, for free right now. The deal is available in the United States and probably a few other places, though we can't be sure exactly where it is and isn't valid.

Yo-Yo Ma was born in Paris, and his family moved to New York City when he was five years old. His talent for the cello and other instruments earned him a place at the prestigious Julliard School. His long musical career and dozens of albums have granted him worldwide fame, even among those who don't normally listen to classical music. He's an accomplished soloist as well as an orchestral musician, and he has dabbled in other genres such as bluegrass, American country, jazz, and Chinese and Brazilian folk music. 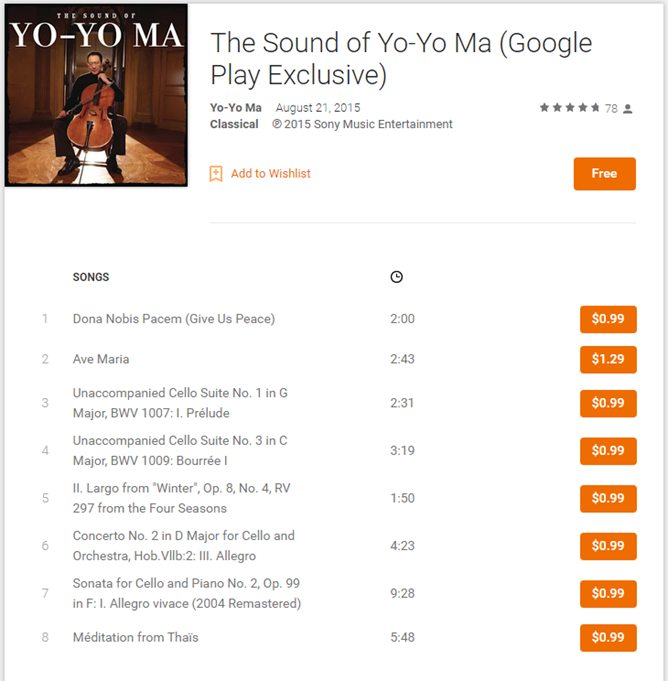 The eight tracts on The Sound of Yo-Yo Ma are all classical instrumental pieces, and would cost you $8.29 to buy individually. Once you click "free" and add them to your Google Music Library, you can play them online any time and download them to any device with Google Play Music installed.

[Weekend Poll] Are You Interested In The New Moto 360, Flat Tire And All?

Report: Verizon Will Get A US Exclusive On The Moto X Play As The 'DROID Maxx 2,' DROID Turbo 2 ...