64GB? Kid's stuff. 128GB? Paltry. Real smartphone spec-hounds will settle for nothing less than 256GB of local onboard storage (which, incidentally, is more than many laptops these days). At least they'd settle for nothing less if any of those phones were actually available. There will be one soon, in at least one location: the ASUS Zenfone 2 Deluxe Special Edition. It's coming to Brazil sometime in the future for an unspecified price, though "quite a lot" would be a safe bet. The model was shown off on the official ASUS Brazil blog.

The Zenfone 2 Deluxe Special Edition is identical to the high-end version of the original Zenfone 2, with 4GB of RAM and a faster Atom Z3580 processor, with the obvious exception of the greater storage capacity. (Oh, and it still includes a MicroSD card slot, bringing the maximum capacity up to a staggering 384GB, minus the OS and formatting data.) The 256GB version will be available in two colors, one with a diamond-pattern back (rather like some of the old HTC Touch models running Windows Mobile) and another with black and grey diagonal stripes. Both get orange trim around the front screen and navigation panel and around the volume buttons on the rear. 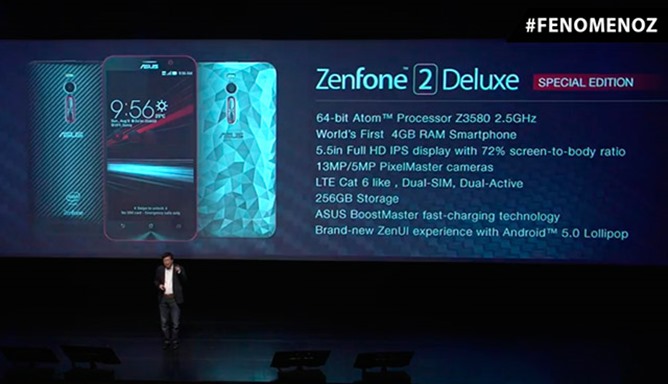 So far the Deluxe Special Edition has been announced only for distribution in Brazil - it will almost certainly be made by the local manufacturing arm of Foxconn specifically for that market. There have been no indications of a wider release. ASUS is probably going to take a hard look at sales figures in Brazil to determine whether a wider release of super-high capacity phones is worth the extra expense.