Play Games (which only launched in 2013) isn't as old as other Play apps such as Music, Movies, and Newsstand —but that hasn't stopped it from beating all three to the one billion installs mark. Now, before anyone gets too excited, that doesn't mean a billion people have all gone out of their way to install the app. Most of them likely bought devices that came with the software pre-installed. I'm someone who barely even plays mobile games, and Google probably has me down for four installs. Still, the older Play apps also generally come pre-installed as well, and Games has managed to come out ahead. That's not bad for an app that mainly just lets you compare your number of achievements with other people's.

Talkback is an accessibility app aimed at making Android usable for blind or visually-impaired users. It helps them navigate by reading text and associating sounds or vibrations with certain actions. It hasn't made the list because it's fun. Talkback is here because it's necessary. 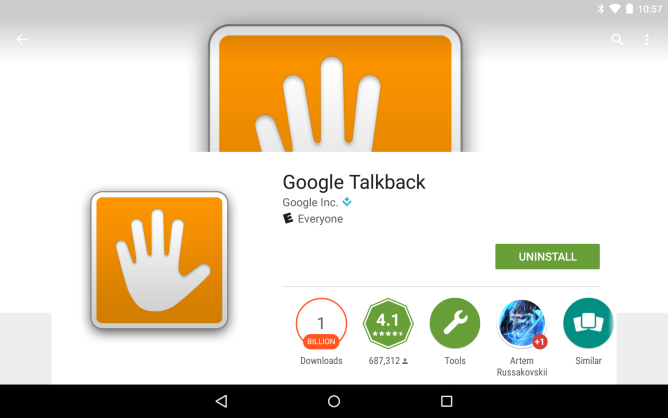 These two additions bring the list of members up to fourteen, following the entry of Hangouts and Chrome earlier this summer. According to Android Rank, potential upcoming inductees include the remaining Play apps, Drive, Instagram, and Skype. There's also the Samsung Push Service, but who's rooting for that? Samsung Appears To Be Pushing Notification Ads To Some Users

Ninja Snap Trolls Friends Who Swipe Through Your Photos With Instant Selfies And Kanye... Lots ...