Google has announced that the Android version of Docs is now gaining the ability to show users how their homework assignments and notes will look once they go through the printer. The option to view print layout is currently heading out to users.

Once the feature is enabled, you should see it appear as a toggle in the app's drop-down menu. Turning it on will show documents with a fixed width. The screen will depict how your papers should look after you print them out, similar to what you experience using Microsoft Word, Google Docs on the web, or just about any other modern word processor. This differs from the app's current default setting, which is to show text in a continuous stream. 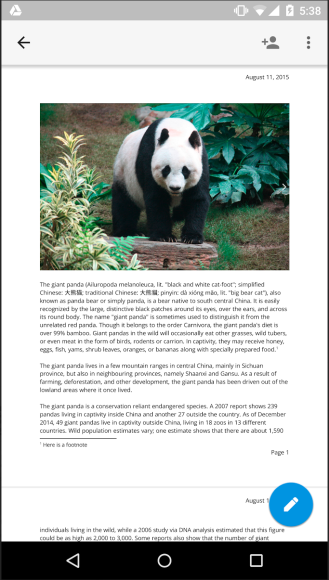 The functionality is still making its way out. I haven't seen it on any of my devices just yet. Let us know if your luck is any different.

Just kidding, we have the APK. Get it below. Note, print layout view is still in beta. Right now documents are set to read-only, but the ability to edit them is in the works.