Wuala, an extra secure cloud storage service that we first talked about back in 2011, has announced its imminent shutdown. Originally created by Swiss researchers, Wuala was acquired by French hardware maker LaCie in 2009 as a means to take advantage of the growing interest in cloud solutions. After LaCie was acquired by Seagate, Wuala too fell under that corporate umbrella.

No explicit reasoning has been given for the shutdown, but it isn't hard to see that Wuala just hasn't taken off and may well have lost users in recent years. Not only do existing users have to move their data elsewhere, they need to do it quickly. Existing files will become read-only on September 30th and on November 15th, Wuala will be deleting it all. That is 2015, by the way, so this isn't a Google Code-esque slow phaseout.

The key selling point for Wuala was data security. While mainstream consumer solutions like Dropbox, Google Drive, and OneDrive may not be insecure, Wuala provided a truly thorough solution that protected its users from a lot more than your routine password hackers. 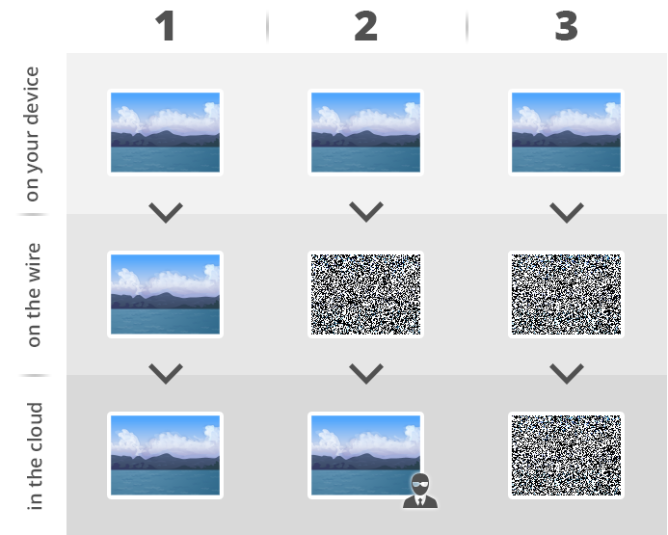 Figure provided by Wuala's support docs explaining the security model. Wuala's is under number 3 while most other cloud solutions are under number 2. The person with glasses is meant to symbolize company employees.

By using client-side encryption—meaning the data is made unreadable to those without a password on the user's device instead of after traveling over the public internet—files stored with Wuala were inaccessible even to Wuala.

No governments, rogue employees, etc. could potentially rummage through a person's things. This also required Wuala to refuse knowledge of user passwords, which potentially leaves people at risk of losing their stuff if they forgot their credentials, but this is a necessary risk inherent to this level of security.

If that type of protection sounds appealing to you, rest assured that it won't die with Wuala. They are endorsing Tresorit as an alternative for users along with providing migration software to help in moving files stored with Wuala over to Tresorit. To further sweeten the pot, Tresorit is offering discounts ranging from 25%-75% with the code WUALA15.

Wuala also mentions SecureSafe, another Swiss cloud storage company, as an alternative. SecureSafe has its own hard sell ready for switchers, complete with a 10 reasons to use SecureSafe for Wuala users article. They, too, are offering discounted subscriptions with a coupon code, WUALA015.

Though it doesn't have an endorsement, another option you may be interested in is SpiderOak, which predates Wuala and uses a similar zero-knowledge security framework.

All of the above alternatives, like Wuala, offer Android apps, though in my personal experience Spideroak's can be a little underwhelming. I can't speak to the others.