The saga of WhatsApp's Google Drive backup option is only rivaled by the app's epic voice calls invite feature that we all had to endure for months. It's there, then not there, then it's back, only to disappear again, then wait it's hiding and only shows when it's time for a backup... but Rita, it's not working for me, and now it's gone for everyone, oh-oh look I got it with root and a few commands, and now it's on for everyone finally. We swear. Ok, maybe. We're not sure.

We've been receiving tips since August 1st and version 2.12.214 of the app and we confirmed the presence of the feature on our devices then, but we decided to wait a few beta revisions to see if the option was sticking around this time or if it would be removed like before. It appears beta development on the feature is almost done now, since we've jumped more than a dozen versions to 2.12.231 and Google Drive backup hasn't gone anywhere. So we're almost sure the option is there to stay... for realsies. 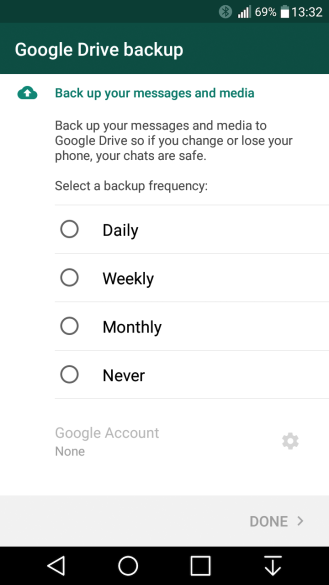 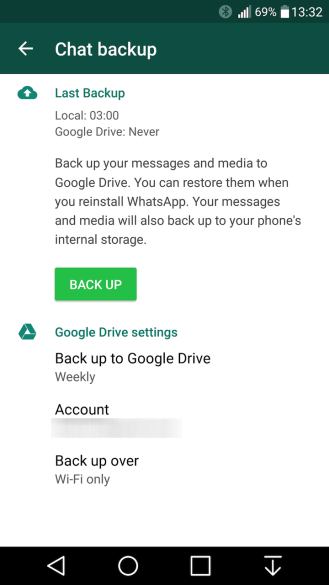 You'll either see a Google Drive backup dialogue show up to ask if you want to enable the feature, or you can head to Settings, Chats and calls, Chat backup to activate it manually. If you enable it, you'll be asked to sign in with your Google account and to allow WhatsApp to use your Drive storage. You can set backups to occur daily, weekly, monthly, or manually, and whether you're on Wi-Fi or both Wi-Fi and a cellular connection. 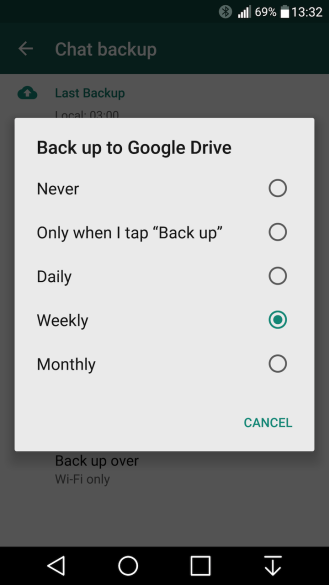 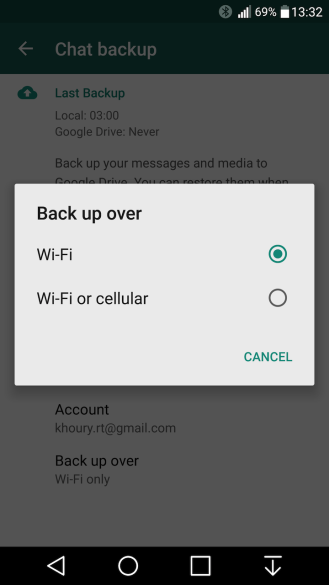 As we explained in our hands-on with the first version of the feature, your conversations and images are backed up, but not your videos. Backups are incremental, so if the first one is too large don't worry, the next one will only include the changes instead of starting from scratch. And finally, backups won't show up as a folder inside your Google Drive, they're visible in the web app's Settings, under Manage Apps. You can't access them manually, but if you install WhatsApp on a new phone and sign in with the same Google account, you'll be able to restore all of your backed up data.

Now before you scream "Victory!" and run off to install the app only to not find the option there, you should keep this in mind: there are a lot of contradicting reports. Some say the option is only available on Android 5.0 Lollipop and above, others say you can see it on any device if you remove the app and reinstall it, others are finding it regardless of their Android version, and some are proclaiming it's a server-side switch (though that last one is very unlikely).

Based on the various reports, I haven't been able to pinpoint exactly where it's working and where it isn't, so my best advice is for you to go grab version 2.12.231, pray to the WhatsApp gods while twisting and dancing around, sacrifice a few insects or fruits or veggies as you wait for the app to install, launch it, and hope Drive backup is there. Let us know which strategy works and good luck!

This article previously referenced v 2.12.233 mistakenly. It's version 2.12.231 that we were testing. Version 2.12.233 has been released since then, and it seems to remove Drive backup (it did it for me and a few other users). It's a cat-and-mouse game. *Throws hands in the air in total dismay*

The cat and mouse game is almost over it seems. Although version 233 removed Drive backup, 235 added it again, and 236 removed it again, it seems the feature is almost officially ready for primetime. Seeing Google Drive backup mentioned in WhatsApp's own FAQ, user +Markus Eyrich emailed the support team to enquire about the feature's absence from his phone. He got a reply back explaining that it is slowly rolling out over the next few versions and that he shouldn't worry if he doesn't see it yet. 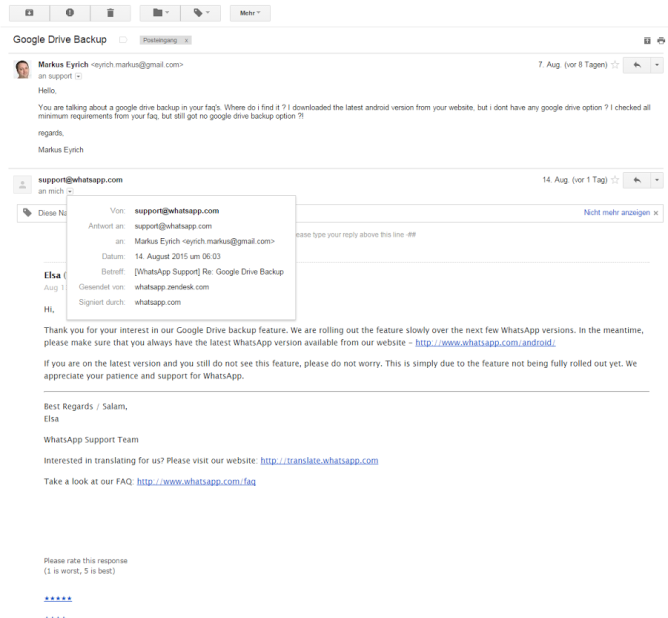