Motorola briefly posted a tweet shortly ago that included a September 3rd release date for the new Moto X Pure in the US. It took the tweet down, and it's not clear why. It doesn't matter, though. The secret is out.

On Sep 3, you’ll see what real love is like. Choose #MotoX for a more powerful connection. http://t.co/cOPJDcFntm pic.twitter.com/uWlzsyE2RE

Again, Motorola is pushing that true love angle. That's a lot to live up to, Motorola. The Moto X Pure (Style in other markets) will cost $399 and is available only from Motorola—no carrier involvement this time. This one device will run on virtually any network, including both GSM and CDMA (like the Nexus 6). It will have all the Moto Maker options from last year as well.

We'll keep an eye out for re-confirmation from Motorola on the release date, but it's probably all systems go for September 3rd.

Motorola has posted the same date on Google+, so it's officially official for real now. Yay.

Motorola, what are you doing?

Well, Motorola just deleted the Google+ post... so something is up. This is probably still the official date, but whoever runs Moto's social accounts pulled the trigger too early. We have a screen of the announcement this time, though. 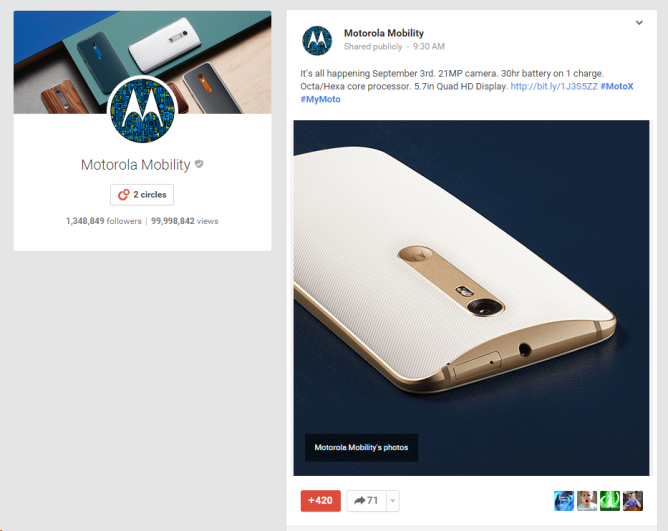