A couple of days ago Evan Blass posted what looked like a render of the upcoming Galaxy S6 Edge+ - Samsung's new flagship expected to be announced at the Unpacked event on August 13th - wrapped in a gadget that doubled as both a phone case and a Blackberry-style physical keyboard. We passed on the story at the time, but more evidence has come to light that makes it seem a bit more plausible. Here's the original tweet from Blass:

Today Dutch tech blog GSMInfo.nl noticed an odd entry on a local web retailer: a listing for what looks like an official Samsung keyboard for the S6 Edge+. It's rare for mobile manufacturers to release full keyboards for phones, even for large ones like the (still unconfirmed) Galaxy S6 Edge+ - they usually reserve those for tablets, and leave tiny phone keyboards to third-party accessory makers. If Samsung really is making a keyboard for its new flagship, an unconventional form factor seems more likely than not. There's no photo on the listing, though the description says it's colored silver. 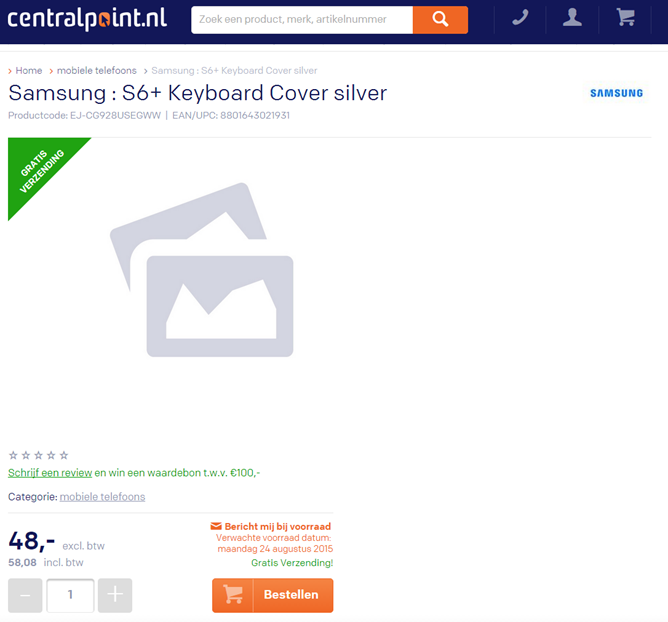 The retailer lists the keyboard at a price of 48 Euro, about $52 at the current USD exchange rate, or 60 Euro with taxes. That would mean a $50-60 price for the US market. The listing says the gadget will be in stock on Monday, August 24th, which roughly matches the expected launch of Samsung's new phones, though retailers are known to make guesses on that.

Report: Google Plans To 'Reboot' Android One In India With Phones Priced Below RS3000