Google may have finally unleashed the new YouTube app layout to the world after four months of testing, but that doesn't mean it's done tweaking the YouTube app or testing new design features. The latest tweak-in-testing, after a redundant (and non-standard) share icon is a new X button on the video player.

Right now, if you're watching a YouTube video through the official YouTube app, you can tap the video player to bring up the scrubber and lots of other controls - minimize, add to playlist, share (again), full screen, and an overflow menu which offers quality and closed captioning options. To dismiss the overlay, just tap the player again.

The new X button that's showing up for some users duplicates that action by also dismissing the overlay. 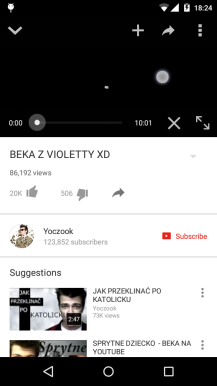 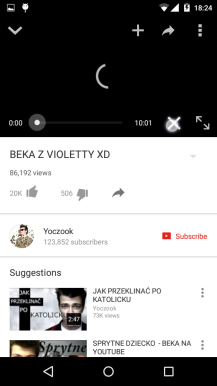 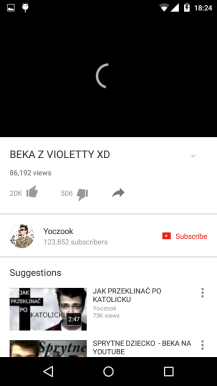 It may seem mundane, but this is an interesting tweak. After all, its purpose - at least as far as I can guess - is to make the action of dismissing the video overlay more discoverable, despite the fact that the action to call the overlay is no more discoverable than its current counterpart.

Google seems to be a company that likes to inform certain aspects of design with data, though, and after all the tweaks we've seen to YouTube lately it's not unreasonable to think that this tweak has some basis in user research. It could be, for example, that Google found users tap the video expecting it to pause and only discover the overlay accidentally, thereby making the connection between tap and overlay somewhat tenuous. On the other hand, actions that relate to the behavior of the video as a whole live on the overlay, and the X only refers to the overlay itself, so before tapping it, a user might think "this will close the video." But all of this is why Google performs tests like these in the first place - to figure out what works best and how.

Whatever the case, there's probably a better way to approach the video player's overlay in a holistic sense, but that would be a much larger change - and a more difficult one to work into existing models of user behavior - than simply adding yet another icon to the collection. Have you seen the new X button yet?