HTC has been experimenting with alternative revenue streams lately, and it was already walking a fine line. Ads started showing up in BlinkFeed a few weeks ago, but users could disable them. Now a large number of One M8 and M9 users have been served an ad in the notification shade. It was promoting a Fantastic Four movie theme, and people are not happy at all. 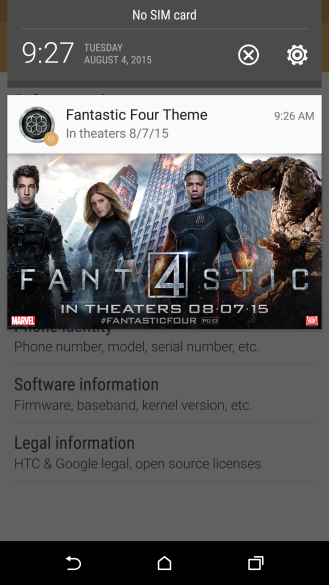 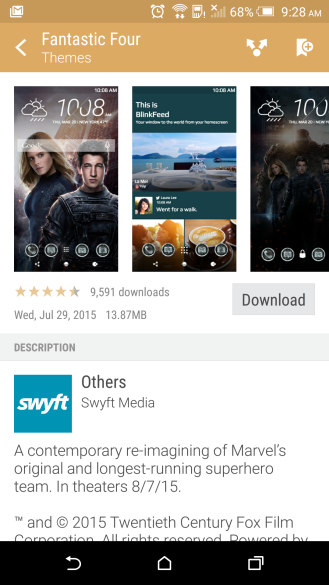 The notification appears to have come from Sense Home, and it was served to a large number of users. It wasn't everyone, but I suspect it was targeted at US users. The notification links to the theme store page for the new Fantastic Four theme, but the image does say "In theaters 8/7/15." Let's be honest here, this is an ad, and HTC probably made money for showing it to people. I'm sure HTC would tell you it's a suggested theme or something, but no. HTC has never pushed a suggested theme notification before that I'm aware of.

Seeing ads is an unavoidable part of using a smartphone, but they're usually in apps. The notification shade has traditionally been sacrosanct. In fact, Google's rules forbid ad spamming in notifications. I think that's the part people are having a hard time getting over. An obvious analog to this is Samsung's Avengers themes, which ship pre-installed on the Galaxy S6. However, simply having it available is different than pushing a notification out of the blue.

HTC will probably issue a statement of some sort, saying that it's just testing things and it wants all One users to have a great experience blah, blah, blah. Whatever. The point is HTC should have been smart enough to know how this would look. Someone should have realized this would upset people, and the last thing HTC needs to do right now is upset people who buy its phones. Also, the theme is mega-ugly.

Disneyland Gets An Official Android App, Brings The Happiest Place On Earth Into The 21st Century