Google announced an upcoming Chrome feature called Custom Tabs at I/O back in May. Today, that feature is finally launching on the Chrome Beta channel, and we've got the APK.

Custom Tabs are basically a pop-out web-view that apps can utilize to show users web pages in Chrome (where your passwords and other items are saved!) without actually fully leaving the app. This can make apps that require web-based authorization for sign-in or simply have lots of external web links a lot more convenient to use, and avoids having to use a full-on built-in webview mode that lacks all your synced Chrome information.

Here's an example of how that feature would work with the Pinterest app from I/O. 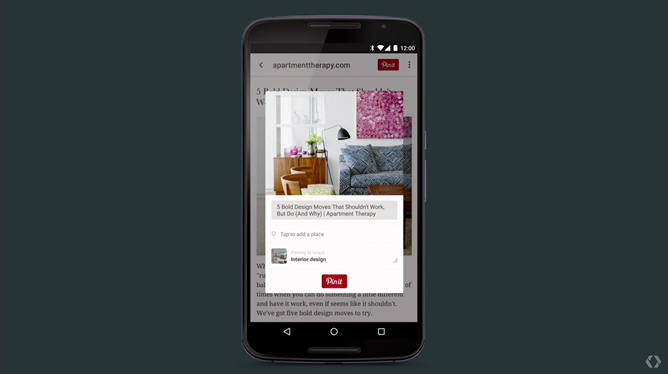 That view can then be expanded to full-screen, and developers simply have more things they can do with these "tabs," allowing custom actions to be placed in the overflow menu or integrating their own transition animations into the experience.

This feature has seemingly been live since Chrome Dev channel v44, but it was reportedly broken, and not until v45 was it available in a usable form, at least according to the Chrome Developers site.

The rest of the changelog for Chrome Beta 45 is below.

The Chrome team is excited to announce the launch of Chrome Beta 45 for Android. Chrome 45.0.2454.21 will be available in Google Play over the next few hours. This release includes

A partial list of other changes in this build are available in the Git log. If you find a new issue, please let us know by filing a bug. More information about Chrome for Android is available on theChrome site.

You can get it over at APK Mirror right now.

Android Platform Version Distribution Numbers For June And July Now Up - Lollipop Up To 18.1% ...