So you have a miniature remote controlled car that you can race around with your Android phone. Big whoop. This guy built a quasi-flying capsule that he controls with his smartphone. He wins. Over and over again. But let's back up to the beginning of the story.

Jono Williams is a plastics engineer and graphic designer who lives in New Zealand. He wanted to build a tree house, but he struggled for months with the limitations. See, trees grow with time, they are prone to the elements and could damage whatever structure you build between or on them, and they tend to obscure the view at least from several angles. So Jono decided to forego the tree and build his own steel support for his little suspended house. 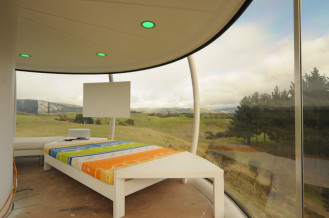 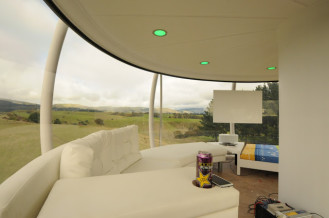 He spent $50,000 and over 3000 hours of his own time designing and assembling each element, from the wooden floors and ceilings, to the steel structure and sphere, the windows, and he topped it off by making the bed as well. The result is a quasi-flying capsule that looks ridiculously awesome from the outside and that's decked with the best features one could hope for on the inside. It's dubbed, very appropriately, The Skysphere.

After you unlock the Skysphere with your fingerprint, you can reach the main floor via a ladder included in the cylindrical steel center, or climb to the rooftop if you want a higher vantage point with a clear look of the sky. There's a queen size bed and a sofa inside, with a hand-made beer cooler, dimmable LED lighting, a Miracast projector, a wireless sound system, and high speed internet. The tower is self-sufficient thanks to solar panels that can power everything for 2 days out of the week — perfect for Jono's weekend getaways. There's no bathroom inside, because he didn't want to bother with plumbing this time, but he says he'll build one in the surrounding trees. 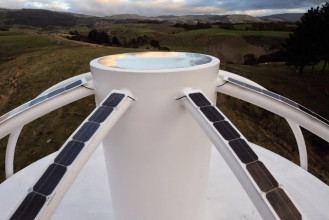 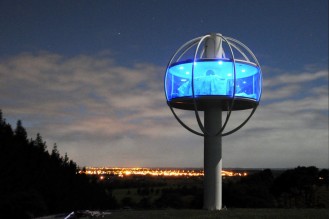 The coolest part, or the cooler part of what is essentially a very cool project, is that all the technology in the Skysphere can be controlled via Jono's smartphone. He used an IOIO development board to connect the LED lights, the beer cooler, the curtains, and the Skysphere's security system. Even better, he gets notifications when he's low on his beer stock, and he can control and dim the LED lights with voice commands. 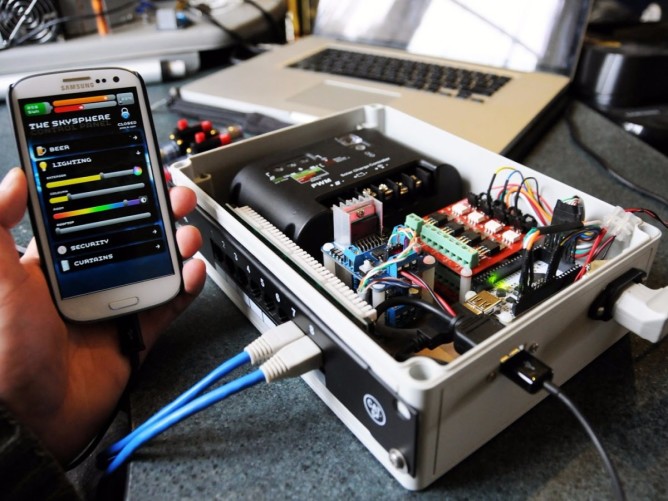 In conclusion, I can only think of one word. WANT.