FLIR ONE plugs into the USB port on your phone or tablet (more on that later) and connects to the official app to relay a live video stream. Looking at the device, you'll immediately notice there are two cameras. This is FLIR's MSX Technology, which it's really proud of. One camera is a standard VGA resolution visible light sensor and the other is FLIR's Lepton thermal sensor.

The magic of FLIR ONE is how it takes the feeds from the two cameras and combines them. The regular camera isn't very high resolution, but it doesn't need to be. The software simply uses that image to find the edges of objects and overlay them on the thermal image. So you get the heat-mapped thermal image with the extracted detail from the visible light camera. It's basically a thermal image with well-defined edges. You can even cover the visible camera lens and see how the image changes. 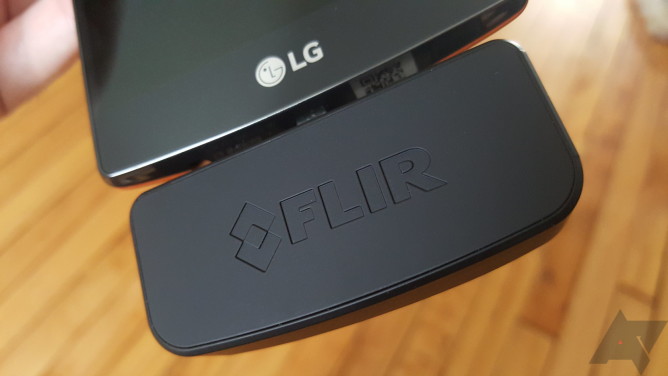 When you plug the FLIR ONE into your phone, it's only using the USB for data. The phone itself isn't powering the camera, which has its own built-in 350mAh battery instead. So that's another thing you have to charge, but FLIR claims this makes more sense as it won't drain your phone battery, and you can easily plug the camera in for a few minutes between uses (it charges with a separate USB port). 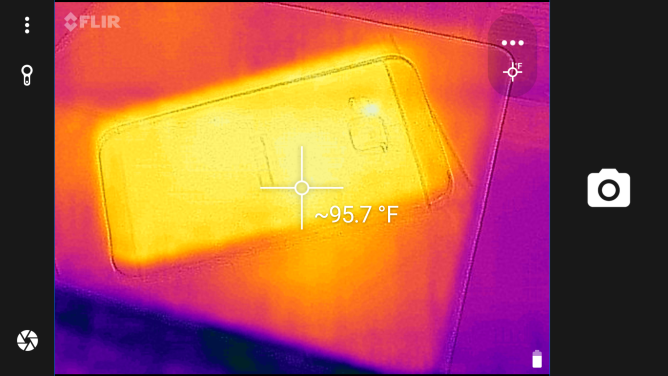 The FLIR ONE app.

The FLIR ONE app lets you capture photos at 640x480 (final resolution) with a number of filters to make different temperature ranges more obvious (just like the Predator!). Videos in the .mov container can be exported too. It also does non-contact temperature measurement right on the display. Simply drag the measurement icon around and it tells you what the surface temperature of various objects is. This data is also retained in the images you capture with the app so you can go back later and move the probe to a different spot in the image.

FLIR ONE for Android is a USB dongle that connects to your phone, making it much more versatile and widely compatible than the case design from the iPhone first-gen version. Let me just answer the question you're likely formulating right now—yes, it's microUSB, and yes, that means it has some compatibility issues. 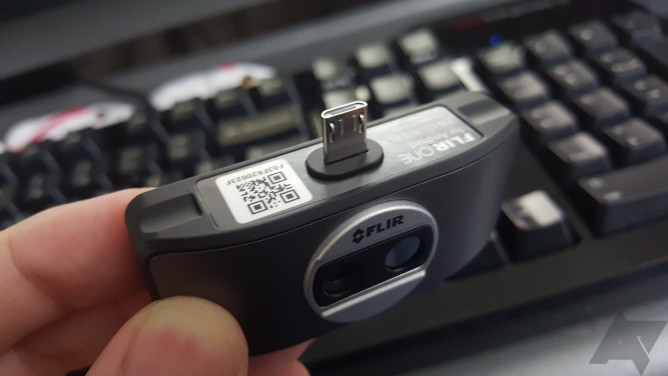 The microUSB plug on the FLIR ONE is oriented such that the camera faces outward (i.e. the right way) on phones like the Samsung Galaxy S6, Moto X, LG G4, and others. It's backward on devices like the HTC One M9, Nexus 6, and OnePlus One. That makes it kind of pointless, unless you want to get an adapter cable that flips it around. FLIR is considering making its own adapter, but reversible USB type-C is right around the corner anyway. Just keep the USB situation in mind before you get too excited.

The FLIR ONE app isn't in the Play Store yet, so I've got a pre-release version for testing. It's responsive enough and all the settings you'd expect are there (calibration, temperature units, etc.). However, some of the UX is just bizarre. For example, to open the list of filters, you have to do this odd pinch and left to right swipe gesture. This has to be a bug of some sort—a regular swipe just isn't being detected correctly. It's the same to access the built-in gallery, but in the opposite direction.

As for the basic functionality, FLIR ONE is impressive. The MSX Technology is very cool, allowing you to see detail in the thermal image that other cameras simply can't touch. It's sensitive enough to detect residual body heat, as with the footprint above. And notice the dog and how his snout is black? That's because he just had a drink so the end of his snout is cold. Neat!

I have noticed that at some distances the alignment is off a touch one way or the other (you can see that in a lot of the examples), but it's not too bad. I imagine this is a firmware thing that can be tweaked. A previous firmware update already fixed incorrect temperature readings, so FLIR can definitely make fixes remotely via the app. The image resolution might not be that impressive compared to regular cameras (and the thermal sensor is a lower resolution than the final images), but it's very good for a consumer thermal camera. The Seek camera, for example, produces 206x156 images. 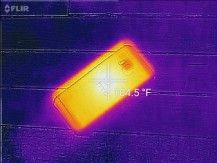 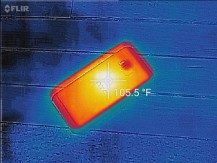 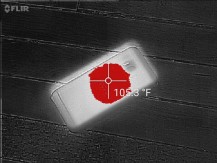 Iron, Rainbow, and Hottest filters with the M9

FLIR ONE comes with a nifty lanyard and case, which means it's more convenient to carry around. FLIR isn't under any illusion that you're going to leave the ONE connected to your phone all the time.

I'm really left wondering about the usefulness of the FLIR ONE. It's certainly fun to play around with, but how often is it really going to come in handy? I mean, there are uses for it. You can use FLIR ONE to check doors and windows for leaks, see water temperature, and look for animals at night around your home.  Some people might also be able to use the FLIR ONE to look for electrical shorts, checking for blocked pipes, and auto maintenance. I will probably use it to see how hot phones get, because why not? 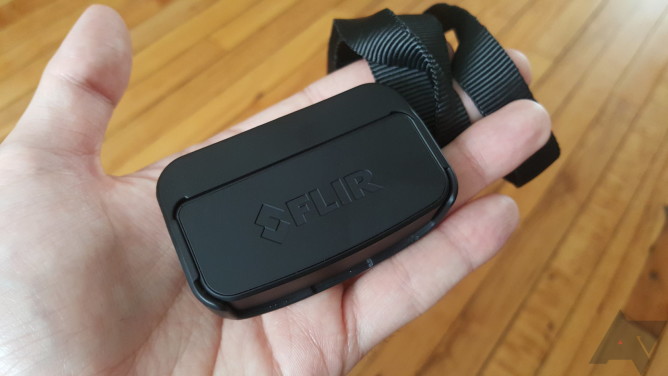 The company has opened a developer program to get apps into the Play Store that make use of the FLIR ONE, which has the potential to be really cool. The apps FLIR is able to talk about now are a little boring, though. There's a night vision monitoring app, a thermometer, and an app that detects heat leakage around the house and suggests possible fixes. It's basically a subset of what you can do with the main app, but hopefully there will be more interesting apps later. 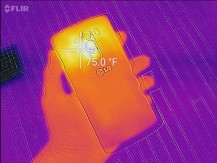 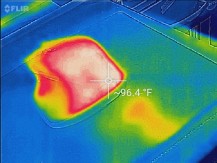 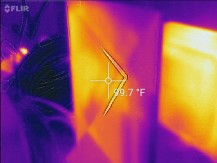 The Android version was supposed to be out this month, but now it's scheduled for mid August. If you can justify the $250 price tag using the above use cases, I say go for it. It's a really neat gadget and it works well. I'd just caution that maybe you should consider the USB connector situation. Or wait a little while to see if maybe a USB Type-C version is forthcoming and what phones end up shipping with that connector.