Got an LG G4? You lucky dog, you. The impressive technical specs and highly adjustable camera, plus features like a removable battery and a MicroSD card slot, have made it a popular flagship choice for power users. Some of those power users will naturally want to tinker with their phones... and now they can. Over on XDA-Developers, forum poster "thecubed" (who's well-known for previous LG exploits) and his team are showing off a solution that they claim can gain root permissions on all versions of the LG G4, regardless of carrier or international status.

At the time of writing the root method is available for the international H815 10c model, plus the AT&T, Verizon, and T-Mobile versions. The team is confident that this method will work with the Sprint model and other international versions of the G4, but they need to get access to system images for other versions in order to customize the software. Since the post already has 11 pages of replies, I'm sure they'll get what they need sooner rather than later. 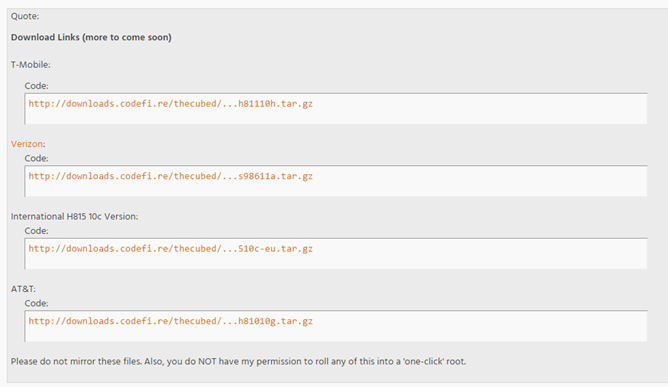 Thecubed calls this root method "Low Effort Root," though that's open to interpretation. You'll need a Windows PC, some customized tools from another XDA post, and a 1.4GB modified file to flash, then you have to follow a fairly detailed nine-step process to get everything working. And don't forget that after you get root, you won't be able to flash OTA updates without returning to stock.. which may or may not be currently possible for your version of the G4. Even so, I'm sure plenty of users are thrilled that a comprehensive root method is available at all.

Keep an eye on the XDA post, as thecubed and company say they'll update it as new flash files for other variants of the LG G4 become available.

The VR Cardboard App For The OnePlus 2 Launch Is Now Available, Invitation Details Posted As Well

OnePlus 2 Apparently Caught On Video Ahead Of Monday's Announcement