As the year goes on, more and more automakers are announcing vehicles with Android Auto, and Honda joined the club today with the refreshed 2016 Accord.

The new Accord will be arriving soon at American dealerships (how soon, we're not sure), and it will be among the very first cars to ship with both Android Auto and Apple Car Play here in the US. Currently, no on-sale vehicle is offered with both, and some upcoming cars won't get both until dealer-installed software updates are made available. 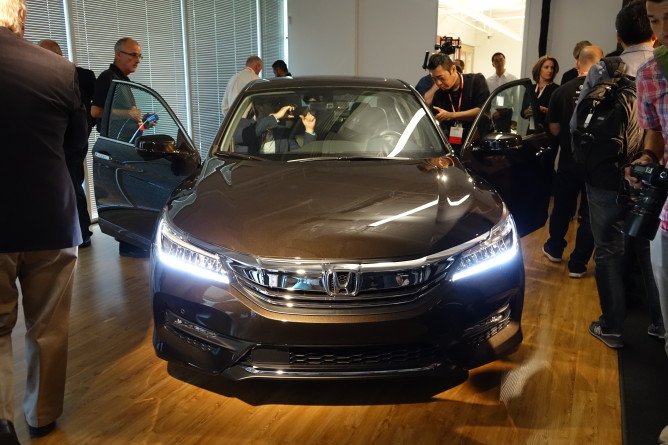 The 2016 Accord is the second model to use Honda's new Android-powered infotainment experience (not to be confused with Android Auto), which proves to be a vast step up from previous iterations of Honda's system, with smooth 60FPS graphics and better performance overall.

As far as Android Auto is concerned, Honda's implementation does actually have one trick up its sleeve. Honda has taken some flak in the automotive press for the large number of screens in its vehicles, but personally, I'll take more over less, and Honda just made the case for me today with their Auto demo. Unlike other Auto-equipped cars I've seen to date, the 2016 Accord is actually able to take information from Android Auto and display it elsewhere in the car. Specifically, the secondary screen up in the dash of the car will show you upcoming direction changes if you're navigating, as well as track info for currently playing music. 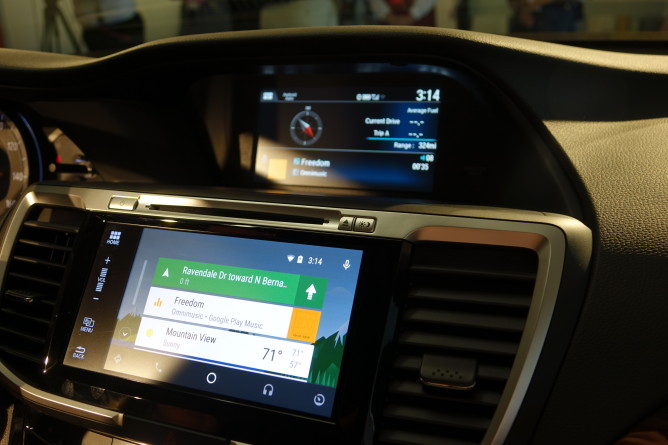 The currently playing track in Android Auto is also shown on the upper dash display, regardless of whether Auto is open on the main dash display.

Admittedly, this is basic additional functionality, but it does serve a purpose. If you want to exit the Auto interface on current implementations, there's nowhere for persistent activities to display on the car - you have to go back into Auto, and that's distracting. The reasons you would want to exit Auto? Things like adjusting vehicle settings, switching to radio for your audio, looking at fuel economy information, etc. With the 2016 Accord, exiting Auto no longer means you're "flying blind" in terms of what Auto is doing, and the navigation and audio background activities become persistent. In other vehicles, like the 2015 Hyundai Sonata, exiting back to Hyundai's infotainment UI means whatever you have running in Auto is now invisible to you. Honda's implementation is definitely a nice, if small, improvement here.

Honda says Auto [and CarPlay] will be offered on all but the lowest trim levels of the 2016 Accord, and hinted strongly that we could expect to see Auto become a staple feature in its new vehicles as it unifies its infotainment hardware and software across the model range. 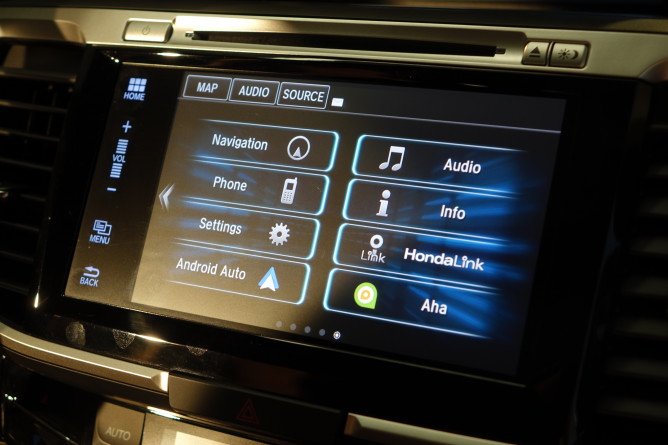 This is in slight contrast to the strategy at GM, where many models will be offered with Auto even at the very basic trim levels, though Honda says most of its sales are at the slightly optioned levels anyway. Exactly which models will get Auto and when, Honda wasn't saying, though the 10th-generation Civic is certainly a good bet for the next likely implementation. The 2016 Honda Pilot, which shares an Android-based infotainment platform with the new Accord, does not appear to be slated for an update to add Auto, unfortunately, according to Honda.

The 2016 Accord is based on the same platform as the 2015 model year car and retains its powertrain options, though adds a lot more cool technology and safety features (Honda calls this suite "Honda Sensing"), as well as more aggressive and modern styling overall. Having tried out some of the Honda Sensing features on a CR-V graciously loaned to us by Honda for the last week, I think the 2016 Accord will offer a very compelling set of technology among vehicles in its class, and Android Auto is really just icing on the cake.