And that was all true until the Logitech Keys-To-Go ($69). I really like this keyboard, and I can't believe how compact it is. And spill-proof. And all the other stuff that makes it great.

The overall look and feel of the Keys-To-Go (KTG from here on out) reminds me of the two Microsoft Surface keyboards combined into one. It's got a super soft, cloth-like feel like the Touch Cover, but it's also completely tactile like the Type Cover. It's the best of both worlds, and typing on the KTG is a pure joy. I've honestly tried to find more reasons to use this keyboard on my Nexus 9...then I decided I'd just use it on my Windows machine for a while. I just really like how it feels. And yes, I'm using it right now.

The top row of the keyboard is packed with useful, yet compact keys (so they don't waste much space), including back, home, recent apps, and menu keys specifically for Android. The rest of the row is basically universal, with mail and music control options, as well as volume, screenshot, and Bluetooth buttons. I really love how Logitech made this a fully-functional keyboard on both Android and Windows. That really adds a ton of value.

From there, it's a pretty standard keyboard layout. It's got a number row and mostly full-sized keys - the tab, caps lock, shift, and delete keys being the only exceptions. They're slightly undersized compared to a typical desktop keyboard, but honestly I didn't notice a difference at all. Touch-typing on this keyboard is essentially the same as any other "regular" (read: non-portable) keyboard I've tried.

If I had to pick one gripe about the KTG, it would be that the space bar is so close to the edge of the keyboard. Why? Because the outer edge is rigid, and I miss the spacebar often because of this. I feel like I'm hitting it, but I'm really just tapping the edge. Slightly annoying, yes, but I adjusted how hard I hit the space slightly and that basically fixed the issue. I'll probably end up beating my other keyboard's spacebar to death when I switch back after getting used to kind of hammering it on this one, though. Oh, I also wish it had backlighting. But that's OK.

Another awesome feature of the KTG is the kickass little smartphone stand that it comes with. Time and time again I've seen keyboard companies try to incorporate some sort of stand into their product, only to over-complicate the hell out of it. Logitech nailed it with the KTG's smartphone stand - it's stupid-simple, attaches to the keyboard, and is insanely easy to remove if you don't need it. It's basically the perfect solution. And yes, it also works with tablets. 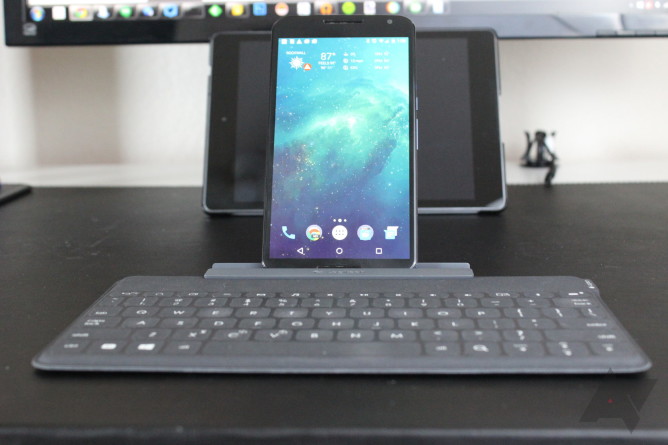 All in all, I think this is the best portable keyboard I've ever used. For Android, for Windows, for iOS...whatever. If you're looking for a great little keyboard to throw in your bag and take on the go, this is the one to buy. It's easily worth every penny of its $69 price tag. I don't leave the house without it.