It's one thing to claim you have an open approach and another thing to make it easier to use your competitor's product. Google is putting their money where their mouth is as they release a Google Drive plug-in for Microsoft Office, though there is still some work to do. While on one hand you can see this as a way to help users avoid Docs, Sheets, and Slides, it also provides feature parity with Drive's own competitors OneDrive and Dropbox, both of whom enjoy deep integration with the office suite. 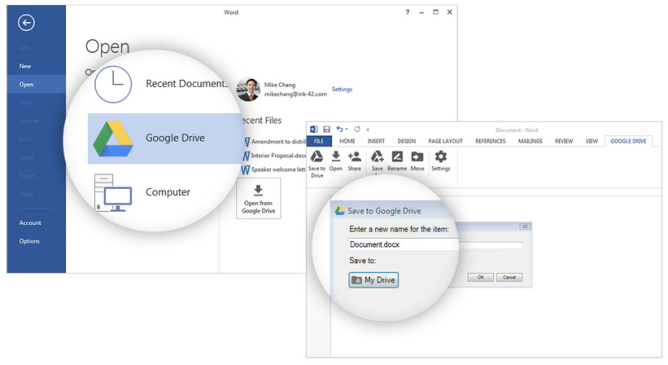 At this point, the plug-in only works on Windows and users are reporting that it doesn't function on the Office 2016 pre-release versions which will launch very shortly alongside Windows 10. I would be surprised if Google doesn't get it working with the newest Windows version shortly, but it's tough to say how long OS X users will have to wait.

The plug-in provides both a way for easily accessing files already stored on Google Drive as well as a simpler method for adding documents to it. Of course, it's not that difficult to do these things with the native clients anyway. You can also add collaborators through Office, though, which is a feature that otherwise could only be accessed via the web apps.

You can download the plug-in here and try it out. Your new settings have their own tab in the ribbon and will be presented as an option when saving/opening files too.

Sony Starts To Roll Android 5.1 For The Xperia Z3 And Z2 Series Of Phones And Tablets