If the names Jide Tech and Remix sound oddly familiar to you, it's because we've previously talked about the Chinese company's Kickstarter project for an 11.6" Android tablet with a full keyboard and multi-window support (an Android Surface essentially) that was going for $39 in its Early Bird pledges. After the success of that campaign, Jide appears to have hit a rough patch with its delivery courier but most users seem to have finally received their tablets and are quite happy using them, as the project's comment section shows.

Jide, which was founded by 3 ex-Googlers, is now back with another Kickstarter project for a new Android product that runs its Remix OS. The Remix Mini is a pebble-like Android "mini PC" with an interesting spec sheet and an even more interesting price tag.

At 124 x 88 x 26 mm, Remix Mini is small enough to be portable, but large to handle all of the ports and features that a mini computer needs. There's a 1.2GHz quad-core AllWinner 64-bit processor under the hood, along with one of two memory/storage configurations: 1GB RAM with 8GB eMMC or 2GB RAM with 16GB eMMC. Connectivity wise, you get Wi-Fi b/g/n, Bluetooth 4.0, Ethernet, and 2 USB 2.0 ports. The Mini is also capable of up to 4K x 2K video output and comes with an HDMI 1.4 port, along with a headphone line-out and a MicroSD card slot to expand your storage. You can see the detailed specs in this sheet below.

A capacitive button lets you power on the Remix Mini, which the team says should save you from fumbling for the hidden power button on the back of your computers. Another significant feature is its energy efficiency: it only uses 10W of power, compared to 60-240W for regular desktop computers. 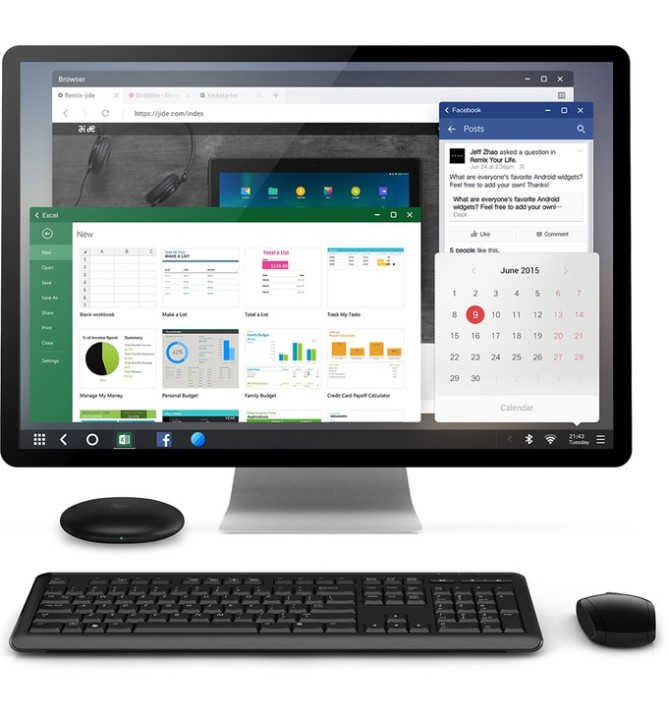 Software-wise, it runs Remix OS 1.5, the Lollipop-based version of Jide's ROM, which differentiates itself with its productivity-aimed features like the taskbar of running apps, a built-in file manager and email client, multiple window multi-tasking, mouse and keyboard support with keyboard shortcuts, and more.

As with the Remix tablet, Jide Tech seems to be asking for a very acceptable price for its Mini. The 1GB/8GB version goes for $20 (Early Birds, all gone) and $30 (unlimited), while the 2GB/16GB version is going for $40. Both ship worldwide, but the fee varies between a reasonable $15 and a rather expensive $30. I suppose that's Jide's solution for avoiding the snafu of its previous project's deliveries. Remix Minis are supposed to land in the hands of backers in October, so the company must be almost done with its prototyping and testing phases.

So far, the project has easily exceeded its $50K funding goal, reaching $340K in two days, with 43 days left on the clock. It's no Pebble Time, but it seems very popular.