If you have one of Amazon's Fire tablets, your wait is already up. HBO Now is already available on the latest generation of slates, which includes the Fire HD 6 and Fire HD 7. Support will also come to the Fire TV and Fire TV Stick in a few weeks. Chromecast support is in the works as well. 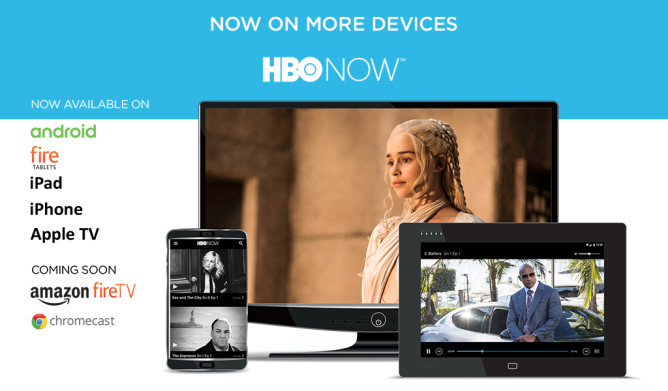 As for the broader Android ecosystem, we'll soon have the option to stream all of HBO's series, movies, documentaries, and other programs for $15 a month (without requiring a cable subscription, unlike HBO GO). Game of Thrones. Last Week Tonight with John Oliver. Veep. Girls. Entourage. True Blood. Silicon Valley. Real Time with Bill Maher. Sex and the City. Band of Brothers. Yup, I'm just listing shows at this point. Join me in pretending they're already streaming to your phone.

SEATTLE--(BUSINESS WIRE)--Jul. 16, 2015-- (NASDAQ: AMZN)--Amazon today announced that HBO NOW is available on Fire tablets, and will be available on Amazon Fire TV and Fire TV Stick in the coming weeks. HBO NOW is HBO's internet only streaming service, providing audiences with instant access to all of HBO--addictive series, unforgettable movies, thought-provoking documentaries, thrilling sports programs and entertaining comedy and music specials for just $14.99a month.

"If there's one thing Fire TV and Fire tablet customers are telling us, it's that they love to watch their favorite movies and TV shows. This is why the team is doubling down on adding great new movies and TV shows for Fire TV and Fire tablet customers--in less than five months we've added over 700 new channels, apps, and games to Amazon Fire TV, and over 300,000 apps are now available on Fire tablets," said Steve Rabuchin, Vice President, Amazon Appstore. "HBO has produced some of the most groundbreaking and award-winning TV shows and movies, and we are excited to introduce HBO Now on Fire tablets and soon on Fire TV."

"Amazon has cultivated an incredibly vast and savvy base of customers that we're excited to provide with unlimited access to all of HBO through HBO NOW," saidBernadette Aulestia, Executive Vice President, Global Distribution Operations, HBO. "The addition of Amazon devices is another great stride in the distribution of HBO NOW and affirmation of our long standing partnership with Amazon."

Starting today, customers can enjoy HBO NOW on the latest generation of Amazon's Fire tablets. The $99 Fire HD 6 and the $139 Fire HD 7 deliver a world-class entertainment experience--in a compact, pocketable design--with a high-definition display, ultrafast quad-core processor and Dolby Digital Plus Audio. Fire HDX 8.9 combines a 339 ppi HDX display with a powerful quad-core 2.5 GHz processor and the latest Dolby Audio--all in a startlingly light design, giving customers the ability to enjoy TV programming, movies and much more wherever they go. Learn more about Fire HD at www.amazon.com/fire-hd and Fire HDX 8.9 atwww.amazon.com/hdx.

In the coming weeks, HBO NOW will also be available on Fire TV and Fire TV Stick, joining the increasing number of developers building for the platform. Selection for Amazon Fire TV has increased by over 700 channels, apps, and games since February, and nearly 2,000 titles are now available, with HBO NOW coming soon. Amazon Fire TV is a tiny box with voice search built right into the remote, and a quad-core processor for seamless streaming; Fire TV Stick is a small streaming media stick that brings an incredible amount of power and content at a great value--it's just $39. Learn more about Amazon Fire TV and Fire TV Stick atwww.amazon.com/FireTV and www.amazon.com/firetvstick.

Moov Announces 'MOOV NOW,' And It Basically Improves Everything Over The First One

Aviary Photo Editor Updated With Premium Option—$1.99 For 30-Day Access To All Filters And Effects