As we approach the end of the year, the time when Motorola has typically announced its previous Moto G devices, rumors and leaks of the third iteration of the G lineup have been getting more frequent, including an appearance on Flipkart, a clear press render, and talks of Moto Maker customization support. 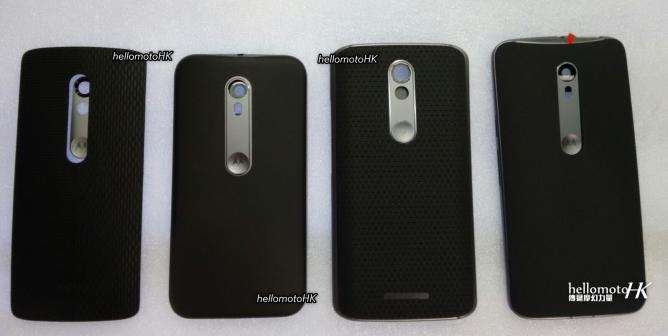 In today's leak, however, the Moto G 2015 (or Moto G 3rd gen) is joined by a few more compatriots from Motorola's land, namely the upcoming Moto X 3rd Gen, and a new Droid and Droid Mini. The image, which seems to be of the backplates of all four devices, shows a similar design language to what we've seen in the G's previous sightings: a metallic vertical strip that connects the camera to the flash and the Motorola logo. Also worth noting is the resemblance of the Moto X 3rd Gen to the Nexus 6 especially in that curve along the top, and the patterned backs on both of the Droid devices.

As is the case with Motorola's almost yearly announcement cycle, we should be hearing more about these smartphones toward the end of the summer and later in the year.

Amazon's Prime Day Promo Is Live In The UK With Deals On The LG Watch Urbane, Fire TV Stick, ...