The Samsung Galaxy A8 has been rumored for a while, but only now has the company made it official. This mid-range phone has a distinctly Galaxy S6 sort of look, but it's even thinner. Too bad it's only going on sale in China.

Samsung's past mid-range phones have been significantly under-powered compared to other less expensive devices, but this one doesn't seem bad. It has a 5.7-inch 1080p AMOLED, 2GB of RAM, a 16MP camera, LTE, 16-32GB of storage (with microSD slot), and a Snapdragon 615 SoC. 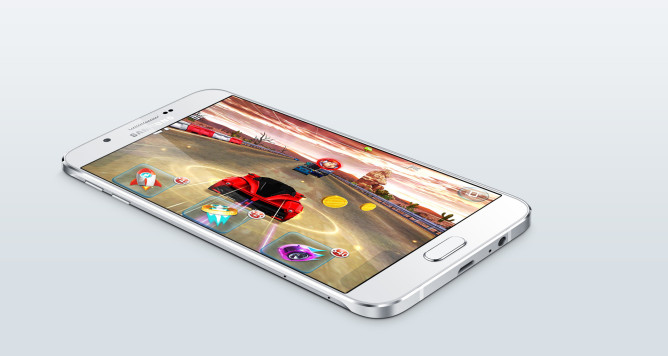 The 3050mAh battery is non removable, but the entire package is only 5.9mm thick. By comparison, the Galaxy S6 is 6.9mm thick. The frame is also metal like the GS6. Chinese consumers are able to pre-order the phone right now in white, black, and gold colors. There's no word on an international version of the device.