By now I figure that most of you know I'm a cyclist. If not, well, now you do. As such, I love to review every piece of Android-related cycling gear I can get my hands on (which, unfortunately isn't as broad a market as I'd like at this point). Moov, a $99 wearable fitness tracker that does a lot more than the average watch-style unit, has been on my radar since day one...but before we start with the cycling talk, I first want to point out exactly what Moov is.

Basically, Moov is a small, fitness-oriented wearable that essentially extracts data from your workouts, including running/walking, swimming, cardio boxing, and cycling. Moov also has a sort of proprietary workout app called 7 Minute+ workout. While it can do all of those things, I don't do all those things. So for the purpose of this review, we're focusing exclusively on the cycling functionality and app.

There are certain things that most cyclists want to track while they ride: speed, cadence, distance, time, elevation gain, calories, and power. Now, things get a little tricky on some of these - an average cyclometer can do many of those, but not all. Of course, there are those "track your activity" phone apps, too. Then there's the Garmin Edge series, which is much pricier than a traditional cyclometer or phone app, but far more accurate. And nothing currently on the market monitors power right out of the box; that requires a power meter, which generally start at $1000 and go up from there. They are, however, the easiest, most accurate way to quantify how hard a rider is actually working. For example, if the rider is averaging 25 miles per hour with a 17 mile an hour tail wind, they're probably not putting a ton of work in. However, if they're averaging 25 into a 17 mile an hour headwind, then they're putting a lot more power into the push. This is where a power meter is important (especially for racers and triathletes), because the majority of workout trackers gauge everything based on distance, speed, topography, and heart rate (not all use the latter, however).

Now, why mention all that? Because Moov tries its best to bring the best of everything into one sleek wearable. The rider straps it to their leg, just around the ankle, syncs it with the app on the phone, and then away they go. From there, Moov monitors most of the things that one wants to know when on a bike: distance, speed, cadence, time, elevation gain, steepest grade, and, interestingly enough, power. It uses something called Moov Power, which isn't really like a traditional power meter, but kind of tries to replicate what a power meter actually does. We'll get into that a bit more in detail later on - for now I'd like to start with the simpler things Moov does. 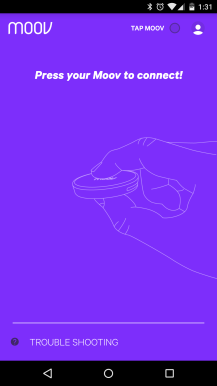 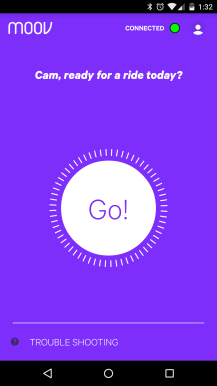 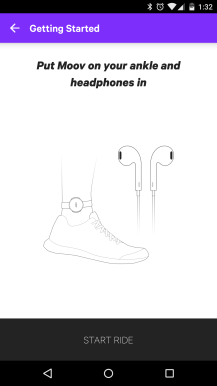 Once synced up and ready to go, the Moov app will prompt the rider to put in headphones. This is my first issue with this product: I just don't think encouraging riders to limit their hearing is the best idea. Sure, there are some really nice "safety" earbuds out there that allow outside noises to come through (which I actually sometimes wear myself when on the bike), but I just don't see that as something every rider has. Instead, they're going to use the stock buds that came with their iPhone, a cheap set they picked up a Target, or something similar. Something that's not necessarily meant to be used during on-road activities. But we're all adults capable of making our own, well thought-out, educated decisions, right? Right.

But I still think it's a bad idea.

So, why earbuds? you ask? Because Moov will provide ride updates via voice every mile or so. This includes average speed for that mile, average cadence, and Moov power. From there it will also provide helpful feedback, like what training zone you're in, what the particular average cadence is good for (climbing, endurance training, etc.), and more. If you're spinning too fast for too long, it will also prompt you to shift to a lower gear, and vice versa. While that's definitely helpful for new riders, it gets quite annoying if you have to get off the bike and walk for any amount of time, at which point it tells you that you're running at a low cadence. It definitely needs some sort of walk detection.

Still, this audible information is nice to have when you're training, and I actually found myself looking forward to the next update, just to see how I perform mile over mile. My Garmin Edge 510 gives a nice overview of where I'm at for the ride in general, but it's nice to know what I'm doing on a per-mile basis, especially when it comes to speed and cadence. 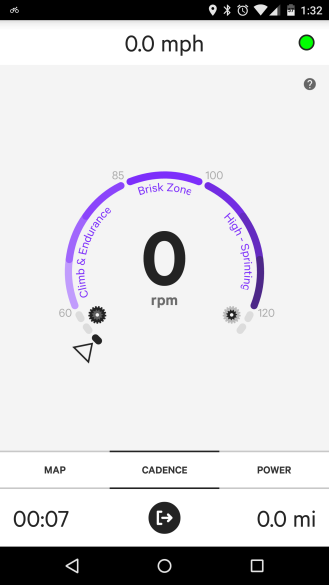 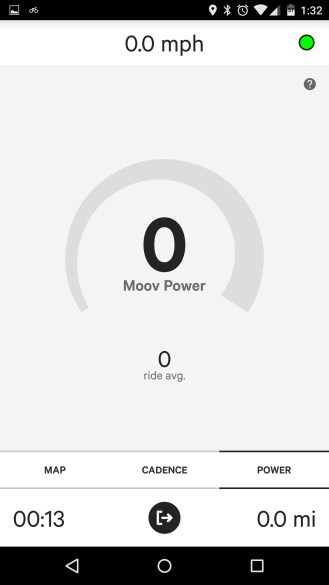 Occasionally, Moov will also let you know how many feet you've climbed in the recent couple of miles. For example, after a few climbs in a row (or one large climb), it will say, "you've gained XX feet over the past XX miles; steepest grade was X%" - this is something that I don't track with my Garmin and found it to be pretty interesting.

Moov keeps things pretty simple during the ride, only providing the info that I've already mentioned. It's worth noting that the phone app also offers certain details, like cadence and speed, but I keep my phone tucked away in a jersey pocket while riding so I didn't check that very often. I imagine it's a lot like most other activity tracking apps, though. 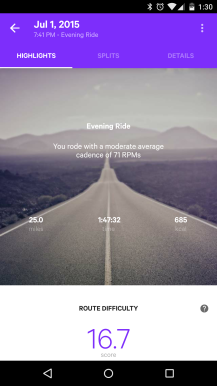 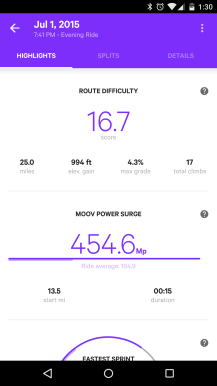 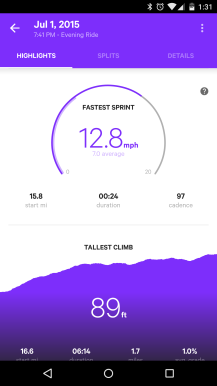 After the ride, however, is when you'll get the full details from Moov. It starts off with a screen called Highlights, which begins with the very basics of the ride: distance, time, calories burned, and average cadence. Like with most other apps, it's just taking a guess at the average caloric burn (and it's doing so without any heart rate information, which is basically just stupid) and I found it to be far lower than anything else that I use. On one 25-mile ride with an average speed of roughly 16 MPH, my Garmin Edge 510 (which does use heart rate data) gave me a burn of 1,533 calories. Runtastic, which I upload all rides to after-the-fact, showed a burn of 1204. Strava came up with 857. Moov showed that I only burned 685 calories. So, which one is correct? Honestly, probably none. But I've found Garmin and Runtastic to be the most accurate. A look at how all the trackers I use compare to each other.

The other thing I want to point out here is cadence: Moov showed I had an average cadence of 71 for that ride, while Garmin showed 86 RPMs as my average. Guess which one I think is more accurate? If you said Garmin, then you're exactly right. I'm using a magnet-based speed and cadence sensor with my 510, which has proven to be accurate time and time again. I still don't understand how Moov came up with that number, because not once during the ride did it tell me my average cadence was below 80. If every mile has an average of 80 or above, then how does the overall ride end up at 71? Something's not right there.

Scrolling down the page offers a much more in-depth look at the ride, including some things I haven't seen anywhere aside from Moov, like Route Difficulty. According to Moov, this is measured by "distance, total elevation gain, intensity of any climbs, and the number of climbs in a route." While I don't put much stock into this kind of number generally speaking, it's still kind of nice to quantify the route as a whole, then try to push yourself on the next ride. If nothing else, it's a great motivator, especially for those who like to compete with themselves like I do.

From there is the Moov Power Surge. Remember how I mentioned Moov's "power" feature earlier, well this is it. Basically, it measures power by using speed, elevation grade, cadence, and "Moov Technology." So it essentially uses the same data that every other app on the planet does, and using some sort of proprietary algorithm to judge how hard you were actually working. It's worth noting here that Power requires a phone with an open barometric altimeter, otherwise it won't work at all.

So here's the thing: I don't actually have a power meter to compare Moov to, so I honestly can't tell you how accurate it may or may not be. That said, I can't imagine something that has no way of knowing the force behind the push to be very accurate. Using the same headwind/tailwind analogy from above, it only makes sense that the rider is going to work a lot harder moving into the wind, and it's entirely possible to maintain a reasonable speed and cadence while doing so. So really, it's just guesswork from Moov. Sure, it's nice to have a way to quantify your work and compare yourself against past rides, but don't put too much stock into that number.

Past that, it showed the fastest sprint and tallest climb, both of which seem to be pretty accurate. Not much more to say about that. 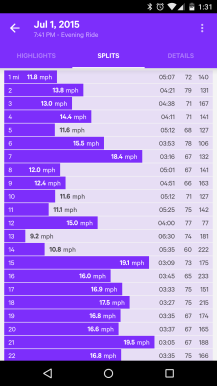 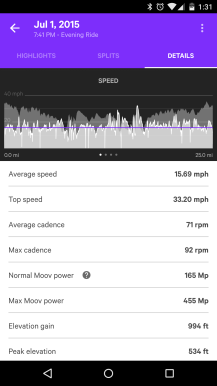 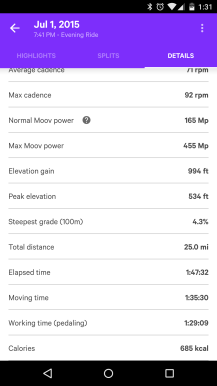 A swipe to the left shows the route and splits, along with a breakdown of speed, cadence, and Moov power for each mile. Here's the interesting part: what the breakdown shows and what Moov was telling me during my ride are two different things as far as cadence is concerned. I generally try to keep my cadence between 80-90, and Moov audibly reflected exactly that to me during my ride. The split shows completely different info, though - not a single mile had a cadence above 79. When given the choice, I'll trust the Garmin's speed and cadence sensor over an accelerometer any day. 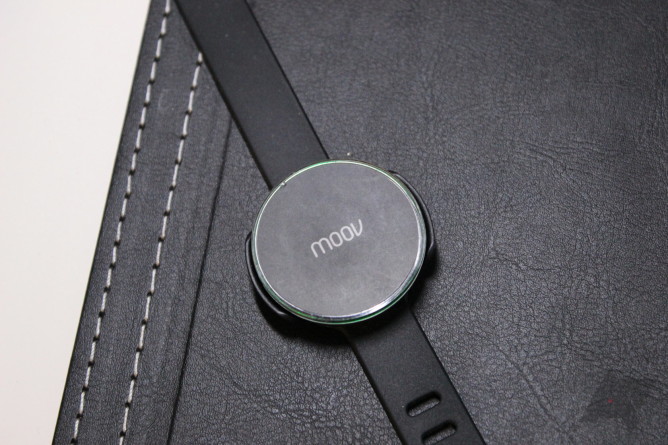 OK, so here we are: at the end, where I share my final thoughts on Moov. It's an interesting device, and I had high hopes for it. However, I personally find little use for it compared to what my Garmin can already do, and I also find the Garmin to be significantly more accurate. That said, a Garmin 510 is four times the cost of Moov, which absolutely has to be taken into consideration. There's also the option of using a Bluetooth speed/cadence sensor and heart rate monitor along with Strava or Runtastic, which would end up being around $130 total ($30 more than one Moov), and again, more accurate. That said, I do think Moov has its place, and there's a lot of room for improvement. This is a brand new product, and with a few tweaks - like the ability to connect to a heart rate monitor, for example - it could be a great all-in-one solution for fitness riders (or newcomers to the sport). For the seasoned rider, though, there's probably not much reason to retire your Garmin just yet.

Still, I look forward to the coming updates and what Moov will be capable of doing in the future.

If you'd like to learn more about Moov's other features (or purchase one), head here.

Fearless Fantasy Arrives In The Play Store, Remains Just As Quirky And Vaguely Creepy As Ever