On July 7th, the domains AndroidSecured.com and AndroidSecured.net were registered to BlackBerry Limited, the firm formerly known as Research In Motion (RIM) that presides over the one-time dominant smartphone platform. Below is a screenshot of one of the registration records with the area of interest highlighted. 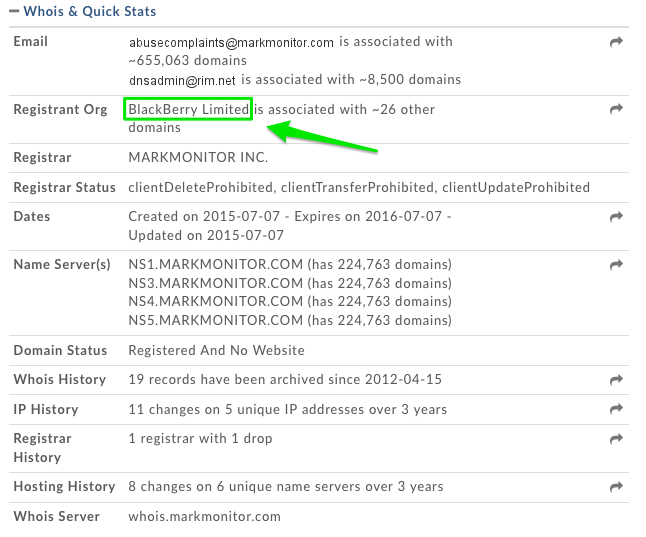 It's no secret that BlackBerry has seen better days. One of their more-publicized efforts to revitalize interest in the OS has been the addition of compatibility with Android apps and, more recently, loading the Amazon Appstore on the newest OS versions. The general direction of BlackBerry has been fairly unclear for a while now, as they have worked on supporting existing devices and have steadfastly released new ones on a regular basis in spite of meager sales. So what are they doing with AndroidSecured.com?

We have heard a rumor about BlackBerry releasing an Android-powered phone called the Venice with a sliding keyboard, though concrete details have yet to surface. The key selling point of BlackBerry, particularly in the enterprise space, has long been security. Dabbling in Android development and staking their reputation on device security makes the domain purchase look like more than nonsense, at the least.

Before assuming this seals the deal that a BlackBerry phone with Android is on the way, it may not be such a drastic move. After all, the company has been developing several apps geared towards managing the security policies of enterprise users for Android.

In the vein of Microsoft, BlackBerry may just be preparing to promote their software prowess outside of their own platform. On the other hand, they could be planning to make a fork of Android with extra security features. That would be quite the twist, considering the way BlackBerry's CEO talked so dismissively of Android's ability to protect its business users.

Or, as is often the case with domain purchases, this is based on some longshot or obscure idea and we won't ever realize what the purpose behind it was. They also bought BlackBerry.sucks—yes, that is a top-level domain—in the past month. Maybe they are just buying up domains to keep others off of them.

Google Releases A $15 Ethernet Adapter For Chromecast [Update: Out Of Stock]