The first thing you'll notice about the HP Pro Slate 8 is that it bears a serious resemblance to the iPad Mini. The screen is the same size and resolution, and it's a 4:3 tablet. I'm personally very in favor of this screen ratio for tablets as they're less awkward to hold in portrait orientation. Not everyone agrees, I'm sure.

The Pro Slate 8 is narrow enough that you can grip it in one hand by the sides if you've got average or large hands. Not that you'd necessarily want to use it like that, but just to give you an idea. The overall size is comfortable, but I feel like it's a bit heavier than most users would expect at 390g. 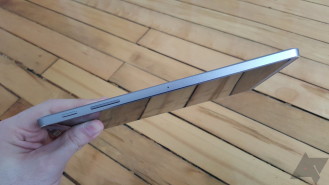 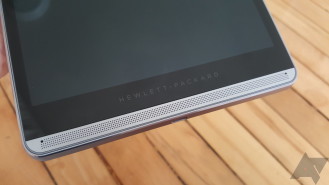 The entire body is made out of a soft-touch plastic with what I'm told is a UV-reflective coating. It's not prone to smudges like the back of the Nexus 9. I'd place it somewhere in between the really matte plastic you get on that device, and something glossy like what LG uses. There is a bit of flex in the back, which I find a little disconcerting.

There are front-facing stereo speakers, and they're probably better than what you'd find on most tablets. They're loud enough, but there's not much bass. Still, having them pointed at your face goes a long way. There are also four mics on the front of the tablet (one in each corner). These are included to make use of the HP Duet Pen, which comes bundled with this tablet. I'll get to that shortly.

For some reason, HP's own spec sheet on this tablet isn't entirely correct. It's running on a Snapdragon 801 (not 800) and it currently comes with Android 5.0.2 out of the box (not KitKat). The Snapdragon chip is a little old at this point, but the 801 is still a solid choice. We've seen some devices with this chip have lag issues with high-resolution displays, and there's a little lag on occasion with the Pro Slate 8. You have to be rather picky to notice. It has 2GB of RAM and I have not seen any memory management weirdness, or at least nothing more than you'd expect on 5.0.x.

HP decided to go with a screen very similar to what you get on the iPad Mini. It's 7.9-inches and has a resolution of 2048 x 1536. That's also the resolution of the somewhat larger Nexus 9, so the HP tablet does have an impressive pixel density of 324 pixels per inch. Obviously the screen is very sharp, but its other qualities aren't bad either. 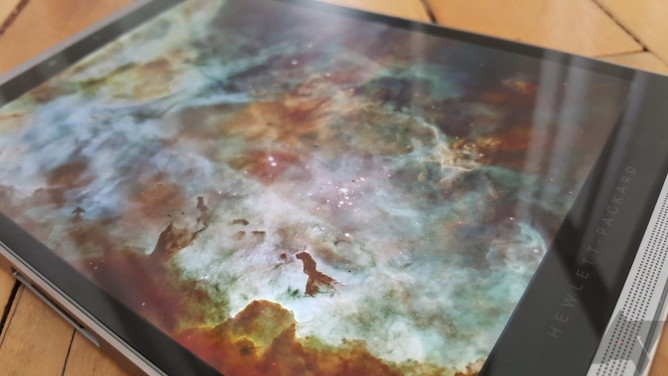 Viewing angles are almost perfect, but the display's maximum brightness seems slightly low to me. It should be fine in any indoor environment, which is really all you need. The colors were also quite nice (for an LCD).

A device of this size is much more comfortable to use while standing or walking, and it's easier to drop in a bag. Although, as phones get bigger, tablets in this size range are only slightly bigger. The experience isn't that much different than using a Nexus 6 when you think about it.

This is HP's big trick with the Pro Slate 8. The Duet Pen might appear at first like a regular stylus, but it's actually a completely different animal. This is an ultrasonic pen based on Qualcomm technology that can write on the screen or on a piece of paper and have the text replicated on the tablet. There are five mics on the tablet dedicated to listening to the ultrasonic tone from the Duet Pen, allowing the tablet to track its location.

The design of the pen itself is really cool—the tip is reversible with a plastic nub on one side and a ballpoint on the other. Just yank it out and flip it around to switch between them. It's rechargeable via a built-in microUSB port on the side, so you don't have to haul an adapter around. My only design concern is that the pen side only has a tiny ink reservoir. I'm sure HP will sell you replacements, but you'll go through them fast if you use it a lot. 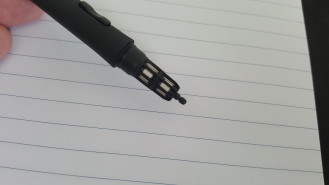 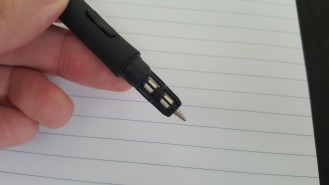 In stylus mode the Duet Pen works like a capacitive stylus in most ways, but the ultrasonic location lets the tablet actually know how far away it is. It's a little like Samsung's S Pen, but it works from even farther away (about 2.5-inches). Sadly, HP hasn't taken very good advantage of this capability. It would be nice if you could click on things or scroll around with the cursor, but there's nothing like that. There is a special version of Corel Painter on the tablet that includes some neat drawing features that take advantage of the Duet Pen. For example, you can select the airbrush tool and change the size of the spray by changing your distance from the tablet. 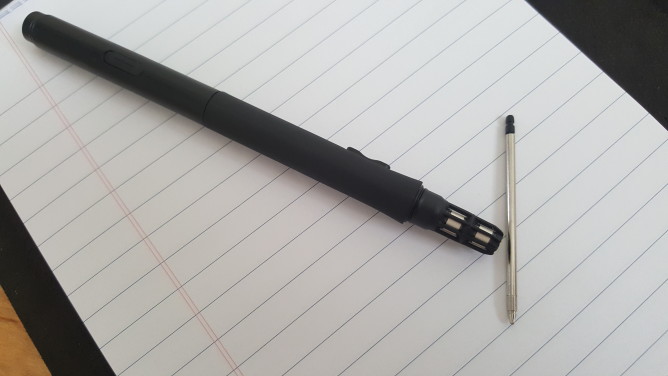 The feature HP is really proud of is the off-screen writing capability. Here's how it's supposed to work—you buy the $69 HP Pro Slate 8 Paper Folio case, and place your tablet in it (also works as a tablet stand). The tablet sits on the right and a regular pad of paper is on the left. The tablet uses the ultrasonic signal from the Duet Pen to duplicate what you're writing on the paper on your screen. The case basically keeps the two devices spaced correctly, but you can do this (awkwardly) without the Paper Folio. 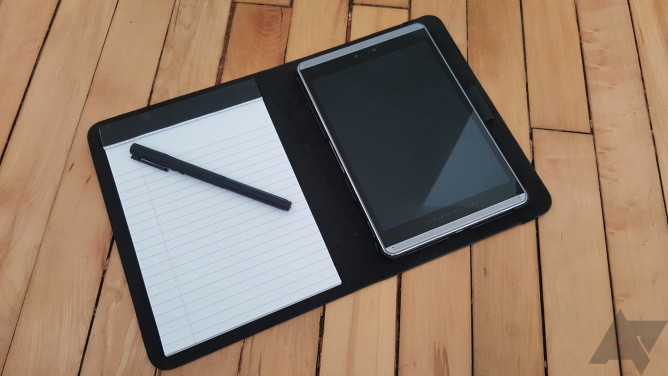 As an aside, I think it's weird to have the tablet on the right side of the case. Your hand is constantly running into it while writing on the paper side, assuming you're right-handed like most people. You can flip everything upside down (so the paper is on the right) if you don't mind the tablet technically being upside down in the case. The case is also the only place you can store the pen easily—it's way too big for a slot in the tablet.

Here's the main problem with the Duet Pen—it doesn't work very well. You have to be very deliberate with your writing for the HP Notes app to create a reasonable approximation of your handwriting. This app makes use of HP customizations to the Qualcomm technology in order to scale the writing from the paper to a smaller screen area. It's able to translate the writing into text, but again, only if you're very careful. When writing at normal speed, I feel like the tablet/software is confused too frequently. I'm not under any illusion I have great handwriting, but it's legible. 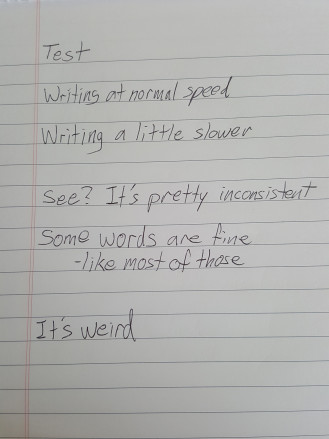 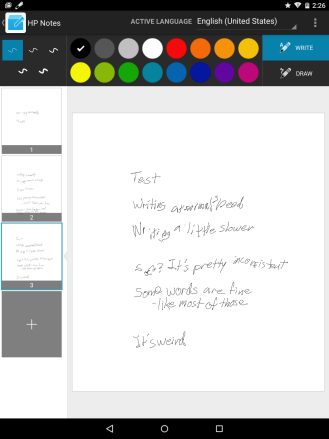 Left: what I wrote, Right: what the tablet saw

Sometimes it does work okay, though, and when that happens it's a really cool technology. It just doesn't work enough of the time for me to recommend it to anyone who wants to digitize notes on the fly.

I don't want to give the impression that I lack confidence in HP, but it's not a company with a ton of experience developing Android software. That's why it's a good thing it didn't try to make any substantial modifications to the OS. The Pro Slate 8 comes with Android 5.0.2, which is an update from the version of 4.4.4 it was announced with.

There's not a ton to say about the functionality of the OS as it's almost completely stock, but there are a few things to point out. HP has re-implemented the network activity arrows on the WiFi icon, which is nice. I like having those. However, it's not lined up correctly. The arrows are several pixels to the right of center, and it's very obvious every time they light up (see above). This is a nitpick for sure, but it's something you will notice. 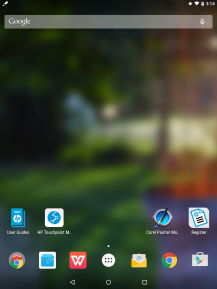 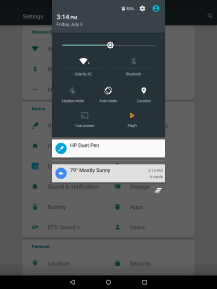 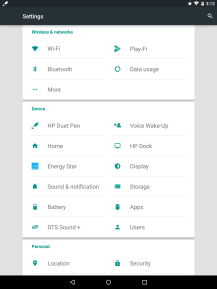 I have to commend HP on their amazing restraint with included software. There's nothing pre-installed that I'd call "bloatware." I suppose that's what you get with a more business-oriented product. The only apps I felt a need to disable were the Avast security suite and Skype (because I don't use it), and neither of those are necessarily bloat. It probably depends on your definition, but this is a very clean ROM at any rate.

The Pro Slate also has a customizable wake-up phrase, which is by default (hilariously) set to "Okay HP Now." I assume this is also Qualcomm technology under the hood. You can change it to whatever you want, but I found it to be only moderately accurate and not really worth using. 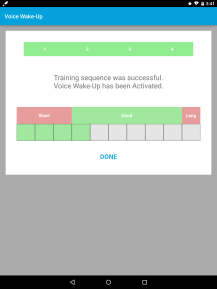 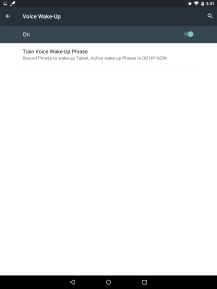 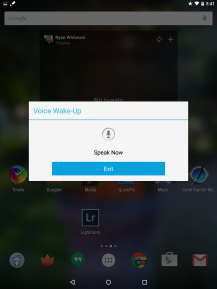 HP got a Lollipop update out to this device very soon after it was released, which is encouraging (especially considering the issues Dell had with the Venue 8 7000). Still, I wonder about HP's commitment to updating this device further. A lot of companies that only dabble in Android tend to lose interest quickly.

HP only lists the battery capacity in watt-hours, but a cursory calculation converts that to about 5000mAh, which is a respectable size for a tablet (it's just a little less than the Shield Tablet, for example). It's easy to forget how good the Snapdragon 801 was for power consumption, and paired with this device it's very easy on the battery. I'm regularly seeing roughly seven hours of screen time, which is reasonable for an Android tablet.

The standby time is actually more impressive. At the rate this thing drains, it can run about ten days in sleep mode on a single charge. For an Android device, that's very good.

If you just look at the tablet itself, the HP Pro Slate 8 is very good. The screen is crisp, and it's a great size if you want a more modest tablet. The 4:3 screen ratio is also great for tablets, in my opinion. It's a comfortable device to hold and carry around, though slightly hefty for the size.

It's all plastic, but the Slate 8 doesn't feel cheap. I rather prefer this sort of matte plastic design to metal, which is usually less comfortable and more slippery.

Things get less favorable when you look at the accessories, like the included Duet Pen. It's a neat idea, and it works well as an on-screen stylus, though not really any better than a capacitive stylus. There's no real use for the distance-sensing feature beyond some useless tech demos, and the writing duplication... yikes. It's a cool idea, but the results of digitizing your scrawling are at best inconsistent. Even with the $70 Folio holder to keep things lined up, it's not good enough that I'd recommend it to anyone.

The HP Pro Slate 8 starts at $419 direct from HP, but I have to wonder how much more competitive the price might have been without the Duet Pen. If skipping all that could have knocked $50 off the price, this would be a good purchase. It's a business-oriented device, but just try giving your employees a Duet Pen—it won't go well. 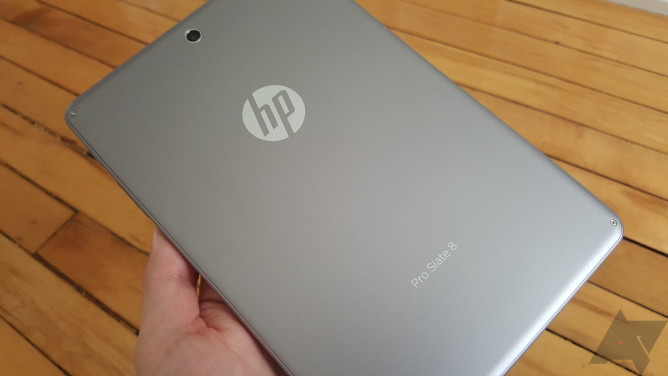 It's still not a bad device, all things considered. There aren't a lot of choices in this size range, and almost nothing else that's 4:3. You would not be crazy to buy a Pro Slate 8, but the Duet Pen will probably spend most of its time in a drawer.

Chrome For Android Hits 1 Billion Installs On The Play Store

Firefox Beta Gets Updated To v40 With Improved Forward/Back Navigation, Various Under The Hood ...